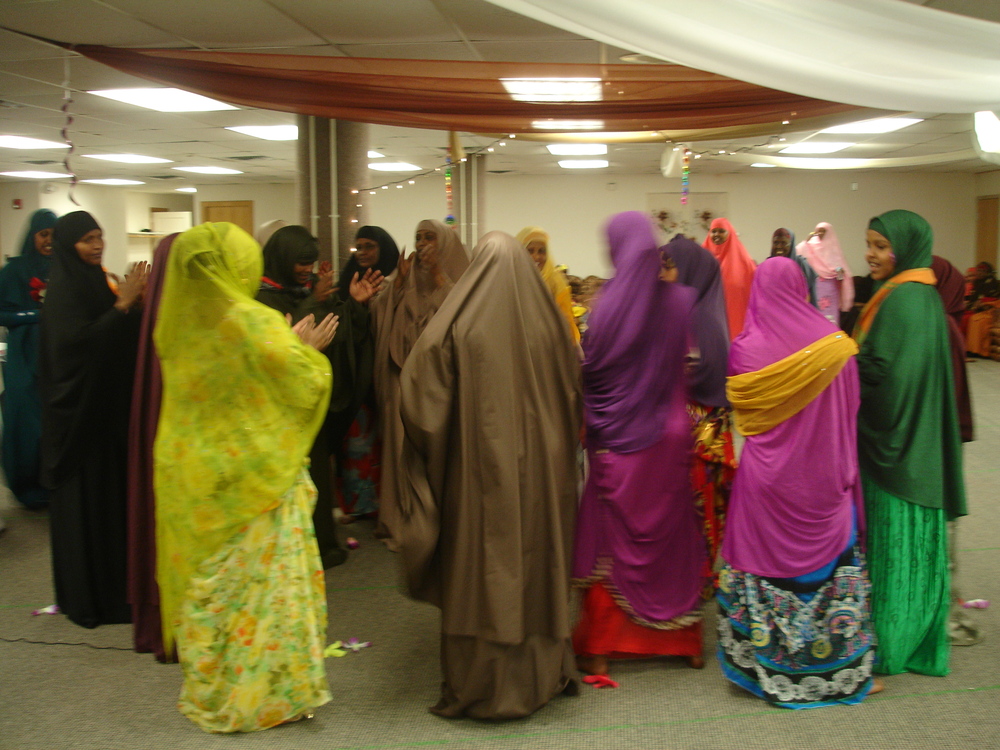 Women dancing at the wedding celebration. 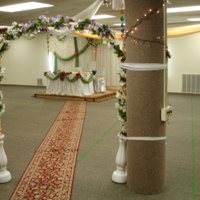 The path of the bride. 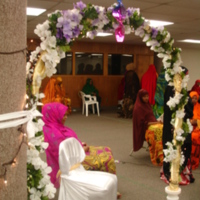 A flowered arch stands ready for the bride to walk through.

On May 24, 2014, a wedding celebration took place at the masjid. The first part of the ceremony had taken place that morning; Ambro, a teenage girl, explained that it was traditional to have a small, private ceremony in the morning, then a big celebration at night. She said:

The guy goes to the girl’s house and [symbolically] asks her father for her hand, that same morning, usually. And at night is where the girl gets all decked out, and people dance for her… [The morning part is] mainly private. Only the scholars, who are saying the Qur’an verses, and asking the dad “Will you let this man take care of your daughter?”, and stuff like that. And family members will be there. But at night, everybody comes.

Several of the older women in the community had planned the decorations for the wedding celebration, which was held in the women’s prayer space. Gold, white, and brown fabric was draped from the ceiling, adorned with rainbow pendants like those that might hang in a yard to catch the wind. Strings of lights and flowers hung everywhere. At one side of the room, a low platform was set up, where the bride would sit at an elaborately decorated table. A long carpet ran toward this table, under a flowery arch, where the bride would walk.

The woman who got married was very religious and had chosen to have a relatively small celebration at the masjid, with only women and girls attending. The groom was celebrating elsewhere with other men. At many Somali weddings the genders celebrate separately for a while and then come together at the end of the night to dance and celebrate together. But at this wedding, the genders would remain separate.

Around 100 people attended although people told me that for a Somali wedding in the area this was very small. Playing recorded music was not allowed in the masjid, and several young women spoke of this with regret. They said that weddings where recorded music was played were “more fun” than this one, and that the bride would usually dance more, with recorded music, and everyone would dance with her.

Women chat amid the celebrations. 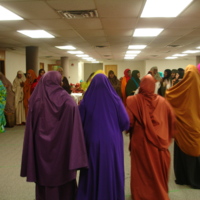 Women dance at the wedding to the sound of drums and folksongs about love. 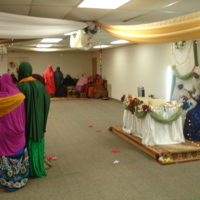 The bride watches the dancers.

Instead of playing recorded music, women were drumming, singing, and dancing. The celebrations started at around 9pm. At 10, about thirty women were standing in a circle, several rows deep, clapping along with a woman who was keeping the beat with a drum and drumstick. Another woman was singing into a microphone, as some women also ululated.

Women went into the middle and danced, one or two at a time, dancing for a little while and then running out, often laughing. Many danced with veils or scarves, jumping and moving them in front of their faces. Some made a hissing sound in rhythm with their dance.

Other women sat at the tables and chatted, waiting for the bride to appear, while little girls ran around playing. Mariam, a freshman in high school, told me that the bride was in another room, getting “bedazzled.”

Everyone else at the wedding was fairly “bedazzled” as well. Women were dressed in glittery, translucent, and intricately patterned fabrics. Some showed their hair a bit; Mariam explained that there was more freedom than usual in how to dress, because it was a wedding and only women were there. Many had fresh henna designs on their hands and arms. To read more about henna at the wedding, see the Henna page.

At around midnight, the bride appeared, dressed in a Western-style wedding dress with a four-foot train. A white hijab covered her hair, and she wore a flowery headdress over it. Mariam commented that the bride could have worn anything she wanted, and chosen either to cover her hair or not; she said that many Somali brides choose Indian clothing. The women gathered along both sides of the long carpet to watch her walk to her chair. In front of the bride, a flower girl walked, throwing artificial flower petals from a basket.

The women grouped into another circle and began to dance for the bride. They passed the microphone and drum from woman to woman, singing folk songs about love and praise of the bride in different styles, from different regions of Somalia. Some of the women laughingly tried to teach us (the American guests) how to dance in the Somali style as well, and how to ululate.

Women chanting at the wedding before the bride's arrival.