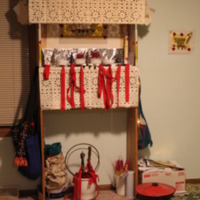 Hanging from the left side of the front door of my uncle and aunt’s house is a fake puppy while a pair of red corns dangle from the middle of the door. The fake puppy and red corn are used to prevent bad spirits from entering the house. Washoua and Bao, along with many other traditional Hmong families, believe that bad spirits will be afraid of the red corn and the fake puppy, and therefore will not enter the house. Warding off bad spirits is a way to protect a Hmong’s house and family. When entering the home, I took of my shoes on the small rug in front of the door. The dining room is to the right and the living room is to the left. Their neeb altars were in the corner, covering half of the wall. The couple sat me down at their dining table. The dining table had a flowery tablecloth with two calendars on sitting on top of it along with an American flag. Resting on the center of the table was a big bowl full of oranges, bananas, apples and mangos. In the corner of the dining room sat two sewing machines and a tall glass cabinet full of beautiful glass cups.

As we sat down, I introduced myself and told them where I go to school and the purpose of this project. Before coming, my mom had to call and ask permission for my visit and they agreed. My parents also accompanied me to my uncle and aunt’s home. Washoua and Bao sat at the end of the table listening attentively. I began recording and started to ask my preconceived questions. I checked the digital audio recorder every ten minutes to make sure it was recording. The weird thing was that after I had asked all my questions and my uncle and aunt told me their story, I listened to the recorder but nothing had been recorded. Why is this important to note? My mom says that usually when people want to study Hmong Shamanism, one must thov, meaning ask politely. Since shamans have spirits that guide the shamans to negotiate with other spirits, called Qhuav neeb, one must ask permission from shamans in order to study and write about shamans. My mom said we should’ve bought some incense sticks and asked permission from the Qhuav neeb.

Their Story and Insights

Washoua Vang and Bao Kha have been married for more than thirty years. Vang and Kha both have been shamans for fourteen years. Washoua said:

They identified themselves as txiv neeb (shamans) that conduct the type of neeb call neeb pog thiab yawg. There are two types of neeb pog thiab yawg. The one that Washoua does is called neeb tswb zeej. This means the shamans wear a black headscarf instead of a red one. This type of neeb is passed down through the generations. In other words, Vang’s dad and grandpa was a shaman, therefore Washoua was one. The qhuav neeb (the shaman’s helper spirits) from his family had passed down through generations. One of his children one day will also have these qhuav neeb and will become a shaman.

Vang particularly focuses on what he feels when he is an ua neeb. He describes it as voices, his qhuav neeb, guiding him to find the spirit and reason to the illness of the person he is healing. He expressed the following:

Vang also explained to me that the voices are like seeing sparkles. He compares these sparkles to fireworks when they explode in the sky and the sparks fall down. He says that the voices are similar to seeing black, red and blue sparkles. Each color of sparks tells him what the cause and type of illness he is looking for in the person. The red one is called shu, meaning the root cause is blood, murders or the killing of someone. The black sparks signify an illness relating to someone or something bad that has come into your home and is being relentless to the txiaj meeg. The txiaj meeg is the guidance in homes and also the spirit that watches over money and wealth. If someone harms this home spirit, the family may have stress over money and is need of a shaman to fix it. Vang explained the sight of sparkles during his practice of ua neeb:

This process occurs when the shaman is beginning his neeb. If you are a shaman and you conduct a ceremony or ritual (neeb) to someone but don’t see any of these sparkles, that means that person doesn’t have anything bad related to the house or their illness isn’t that big of a deal.

The fact that homes and houses also play a huge role in Hmong Shamanism became clear when talking to Washoua and Bao. Vang continues to talk about the importance of the home. He says that in every home, young spirits live there that protect the house, acting as a shield to the family that lives there. Therefore when the shaman travels to spaces, like a home, these spirits tell the shaman where and why the person is ill. For example Vang described that if the dab qhua in the house is not happy because it has been touched, it causes a person in the family to be ill. This makes the family realize that they need to better protect the dab qhua. The dab qhua relates to the xwb kav, made of paper money, feathers and chicken blood, which is the holiest and most protective item in the house.

Bao Kha started being a shaman when she gave birth to her third child. She knew she was going to be a shaman when she was a young girl back in Laos. I’ve asked her, “How do you know you are going to be a shaman?” and “How do you become a shaman?” She answers that it is going to be a long story; therefore she will give me the shorter version of it. Kha first explained to me the difference between being “crazy,” and becoming a “shaman.” When you become a shaman, it is as if you were crazy. Crazy people hear voices but to her the voices are helping guide her to become a shaman so she can heal others. When one becomes a shaman, one will become really sick and go through a lot of illness and pain. These types of illness and pain that a shaman feels are the types of sickness that he or she can heal and cure. For instance she recounted a story that one day she felt a pain on her arm. At the time, she had already conducted several ua neeb ceremonies to heal people. Two days after she felt the pain on her arm, a lady asked her to perform an ua neeb because her arms hurt. This is an example of how the types of sickness that shamans go through are the types that they can heal.

Kha said that one time she was so sick that all her hair fell off. She would also faint and come back to reality by herself. These are some of the types of illness that she can heal because prior to becoming a shaman, she already experienced those types of pain. For the most part, a lot of Hmong shamans are like this; they experience a lot of different types of minor to extreme pain and illness before becoming a shaman. Some of this pain and illness cannot be well explained by western medicine and that is how one knows he or she should become a shaman.

My aunt Bao Kha and my mom also gave insights into the types of shamans that exist. As previously mentioned, there are two groups of neeb. The first group wears the black headscarf over their face when they perform ua neeb. The second group wears the red headscarf. The black headscarf group has two kinds of shamans within it. The first is neeb tswb zeej, which is the neeb of great ancestors that has been passed down for generations. Kha and Vang both comes from shamans that conduct neeb tswb zeej. The other kind of neeb is the neeb xua npleg which is only for healing those who are going to die. In this type of neeb, the shamans do not wear the finger bells on his or her hands. In fact this neeb is very quiet so that the shaman can go steal a spirit in the bad spirit world in order to bring it to the original body. This is different from the neeb tswb zeej because those who perform the neeb tswbzeej do it with finger bells. Kha explained the differences of shamans as the following:

Neeb sov is the only type of neeb with the red headscarf. This type of neeb as my mom explained to me, are shamans who, when in heaven and came to life [on earth], are fated to become a shaman. They are different in that this type of neeb is not pass down through generations. Only the special ones are picked to become a txiv neeb (shaman) that does neeb sov. There is also the last type of neeb that shamans conduct near the stove. In total, there are five types of shamans.

Bao, Washoua, and my parents also discussed a bit about how Hmong shamans not only heal the Hmong community but also other non-Hmong people with different backgrounds. My mom told a story of an aunt who lived next door to a white family. The wife of the family didn’t like them because my aunt’s family would hold religious ceremonies and rituals that would annoy them. One day one of the neighbor’s kids was sick and the family next door didn’t know what to do. Therefore, the shaman in my aunt’s family said if the family was okay with it, she would call the kid’s soul to come back. The mother was desperate for help so she agreed. After the shaman called the soul and tied a red string to the kid, the kid got better the next morning. This is an example of how Hmong shamans are also open to healing those who are not Hmong. My aunt and my mom emphasized that those who ask for help from shamans should believe that the shamans are doing their best to heal them.

Lastly, my aunt Bao Kha, spoke about why being a shaman and neeb is beneficial to her, her home, and her family. She said that being a shaman is beneficial in that the voices come and tell her if her children are in harm spiritually. For instance she gave this example:

In the Hmong community, if no one in your immediate family is a shaman, you must go find and thov (ask politely) for a shaman to come help heal. Therefore if you have a shaman within your family, it is much more convenient and easier to protect and heal your family.

Bao Kha and Washoua felt a need to prove to the Western side of medicine that what they believe in is real and it works in healing people. My aunt mentioned that it is not just about healing people physically but spiritually. She says everyone has a spirit and that Hmong shamans believe in healing the spirits between worlds.