The Teachers: Gurudev, Guruji, and Sharanji 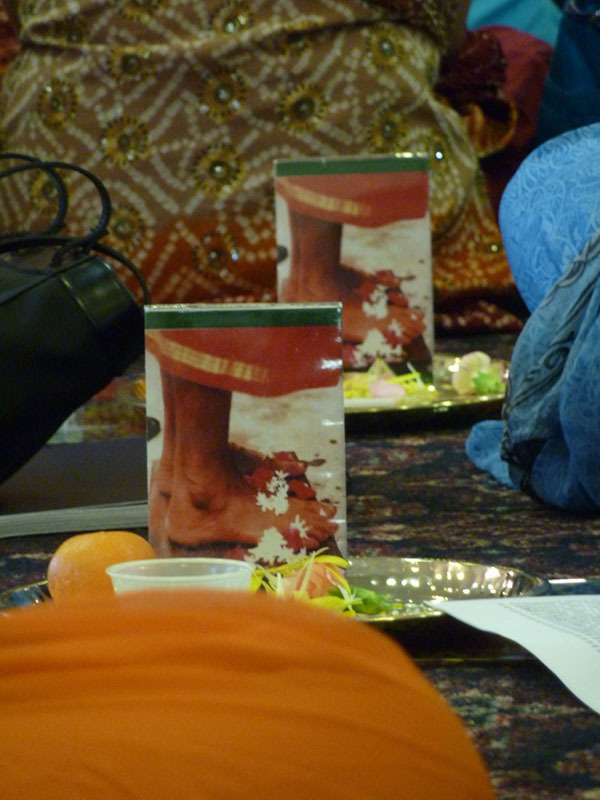 Pictures of Swamiji’s feet during a commemoration of his birthday, Chaska
Photo Credit: Fadi Hakim

Although most of Chinmaya Mission’s educational program relies heavily on trained volunteers, major centers, such as the Chicago Chinmaya Badri, host an acharya, a teacher and appointed leader for Chinmaya Mission members in a particular region. Swami Sharananandaji, who has served in Chicago since 1993 and considers the larger Midwestern region to be within his purview, regularly visits the Chinmaya Mission of the Twin Cities to deliver discourses and lectures. Sharanji, which is how he is referred to among the Mission’s members, is among the numerous acharyas serving at Chinmaya Mission centers around the world and he is dedicated to teaching Vedanta as a brahmacarin, a renunciant. Acharyas, who live within the premises of larger centers, do not marry or accumulate personal wealth, and they are supported by Chinmaya’s member contributions.

All Chinmaya Mission acharyas have undergone several years of education at the Central Chinmaya Trust in Mumbai. The Trust enforces a strict requirement for acharya candidates to have a minimum of a college-education prior to taking on the obligations of this life. During his Parents’ Day lecture at the Chaska center on April 15th, 2012, Swami Sharanananda often used notions of belonging to an Indian homeland, and of duties of cultural belonging to the family. “Now with Skype, everyone can be in touch with your parents in India…. Children, don’t ever say to your parents that you don’t want to hear Indian things.” While they have practically renounced all personal desires, the acharyas are important figures in determining the philosophical orientation and the teachings of the centers, and they continue to serve as the focal point of major celebrations at the Chinmaya Mission. 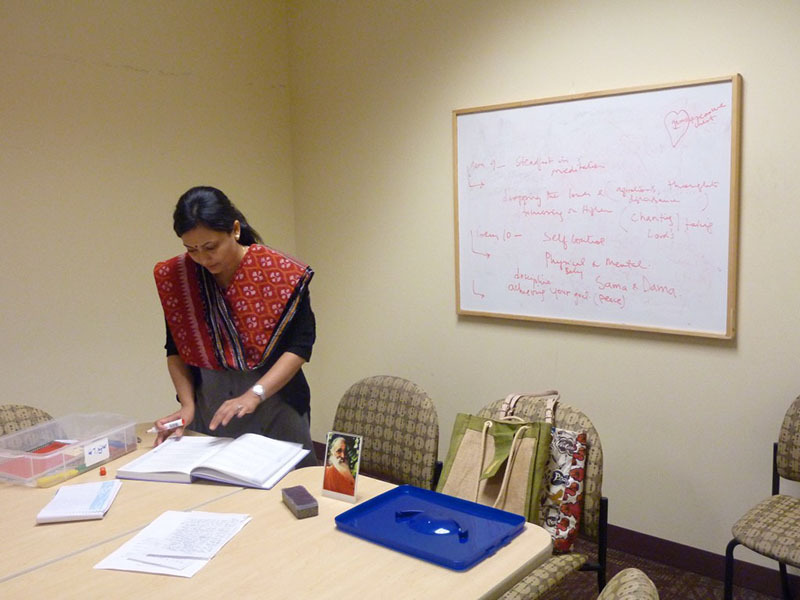 Swami Chinmayananda, or “Gurudev,” as he is called by Chinmaya members, is still a prominent spiritual figure in all Chinmaya Mission centers, and an aarti (a ritual with a lamp and the chanting of prayers in front of the garlanded images) is always dedicated to him at the end of each assembly. Swami Tejomayananda, or Guruji, is his successor and the current head of the Chinmaya Mission worldwide.