Services and Prayer at Shir Tikvah 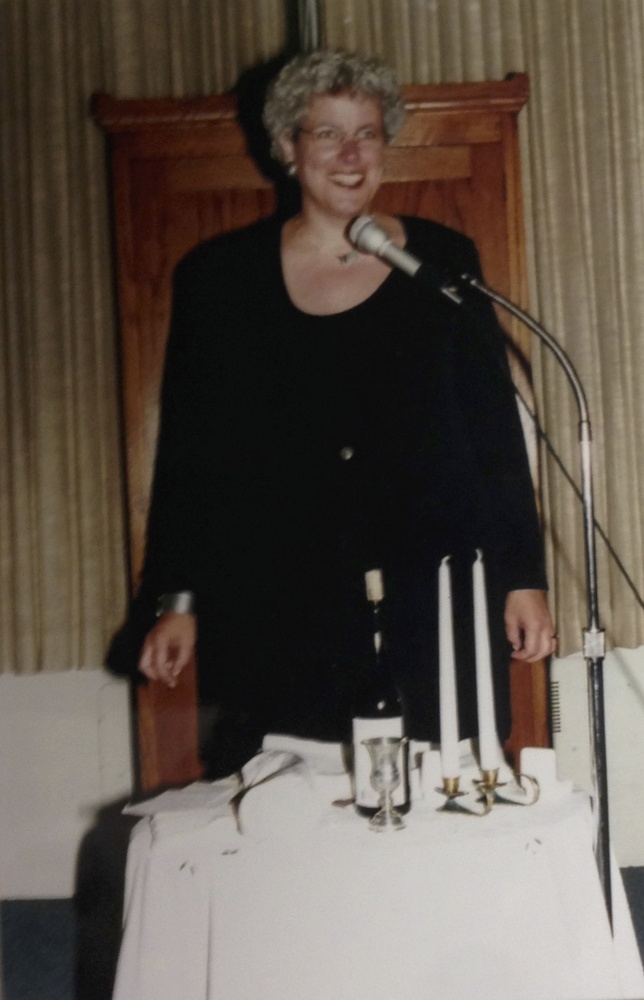 There is so much that is central to Shir Tikvah’s identity, but as a synagogue, services and prayer play a very important role. Yet another outlet for the shared religion and shared values present, worship at Shir Tikvah is a very formative and important experience. Through the use of both English and Hebrew readings from the Mishkan T’filah, the Reform Jewish prayer book that Shir Tikvah uses, the use of music and nigunim (repetitive vocal music and melodies), and reflective and participatory services, Shir Tikvah makes services accessible to all. Due to this accessibility, services are not just a burden, but are often positive experiences that congregants look forward to.

The values that are at the heart of Shir Tikvah are present in all that the synagogue does, and this holds true for the services as well. Certain parts of the service, whether things that are said, the use of prayer, or the structure of the service, fully embody Shir Tikvah and all that it represents. For example, the prayer Oseh Shalom requests, “peace upon us and on all of Israel,” but Shir Tikvah, along with many other Reform synagogues, have chosen to add another line to this prayer. This line, “v’al kol yoshvei tevel,” can be translated as, “and upon all of the inhabitants of the world.” The choice to use this inclusive language demonstrates how Shir Tikvah’s mission is carried out through it’s choices on a day-to-day basis. Another part of the service where the central ideas seem to play an important role is in the time before and during the Mourner’s Kadish, the prayer said by mourners after the death of a close friend or relative. Before the prayer is recited, it is not uncommon for the rabbi to read a list of names for whom the congregation is mourning. At Shir Tikvah, however, rather than simply reading the list, the rabbi pauses after every name in order to let the congregation speak. Those who knew the person who passed away are invited to share memories and stories, fully demonstrating the importance of relationships and the importance of the individual within the larger community.

That people are not required to pay in order to pray is an idea that Shir Tikvah strongly believes in and promotes. 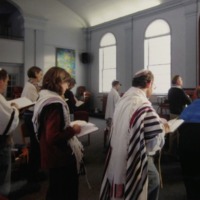 Members of Shir Tikvah gather for a prayer service. 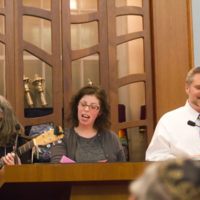 Another time when Shir Tikvah infuses its values into services is on the high holidays. While most synagogues charge non-members to attend services, Shir Tikvah allows anyone to join them for prayer without charge. In line with the ideas of acceptance, inclusion, and radical hospitality, Shir Tikvah believes that if people want somewhere to attend services, they should have a place to go. When asked to think of an event or a moment that truly represented Shir Tikvah’s values and what was important to the synagogue, multiple clergy members and congregants chose to tell this story. The fact that people are not required to pay in order to pray is an idea that Shir Tikvah strongly believes in and promotes. 1

One way to engage the community and help them enjoy the services is through music, something that Rabbi Michael Latz, Rabbi Melissa Simon, and song leader Wendy Goldberg lead services plays an important role in services at Shir Tikvah. Music helps members integrate into the community, and as a result has been key to services since Shir Tikvah was founded. When the congregation was first formed, Jill Abramson, Rabbi Offner’s step-daughter, served as a music leader for services. Since she had a wonderful voice and the congregation could not afford a music leader at the time, Jill filled the position, and she was a major attraction for many people. Eventually David Harris was hired as Shir Tikvah’s Music Director and helped develop a team of music leaders that would rotate from Shabbat to Shabbat. With these different leaders came different musical styles,which was welcomed with open arms by the rest of the community. Just as Jill Abramson and her musical ability had been an attraction, different song leaders became attractions as well. If a particular song leader would be a part of the service on a given day, it was a draw into services for many. 2 By allowing for multiple song leaders and encouraging people to fill these positions, Shir Tikvah was advocating for an even bigger idea, that of lay leadership. Shir Tikvah’s commitment to lay involvement is key to Shir Tikvah’s strong involvement according to congregant Gayle Zoffer.3

A child’s Bar or Bat Mitzvah is an extremely important moment in his or her life, as well as in the life of the synagogue, and this fact is no different at Shir Tikvah. Shir Tikvah and it’s strong community places a great deal of emphasis on this event, and as a result has high expectations. These expectations have to do with not only the skills that should be acquired through the process of studying for the occasion, but also focus on what the responsibilities of becoming a Bnai Mitzvah are. Despite these expectations, the Bnai Mitzvah experience is an enjoyable one. The Saturday morning service on the day of one’s Bar or Bat Mitzvah is filled with lots of energy and a great deal of happiness. Shir Tikvah’s community is once again demonstrated as the previous Bnai Mitzvah does Kiddush, the blessings over the wine, with the current Bnai Mitvah, then giving him or her a short speech and “passing down the Kiddush cup.” The importance of family is also a clear theme of the day, as the Torah is passed down through the generations, ending in the hands of the child who will be reading from it as a part of the service. The theme of education, however, is perhaps the most salient one throughout the day. Aside from all of the education that was completed to prepare for the joyous day and all that the Bnai Mitzvah teaches the community through Torah readings and speeches, there is also education from the Rabbi to the Bnai Mitzvah. Each member of the Bnai Mitvah class is allowed to submit one question to the Rabbi which gets addressed during that child’s service. These answers are very personalized and genuine, allowing the Bnai Mitzvah not only to teach others on this special day, but to learn something important as well.

“I am constantly constantly asking the question of the parents and the kids: how are you going to be transformed by this [service] and what is it going to be your thing that you feel like this was worth it? I have a criterion of four essential questions. How will this be meaningful? How will this be personal, individualized to your individual learning style [and] capabilities? How will it connect you to communities so that it's not only about you as an individual but actually has some communal ties that don't have to be Jewish ties but have to have you rooted in communities or your community (however you define that)? And the fourth is, how does it have to have a deep Jewish basis so that it not just you playing a violin concerto with your community that are clapping for you but then how does it have to do with the Jewish piece of that?"