“So things weren't planned out with thoughtful, future, long range planning. Today if a synagogue wants to look at its mission statement it sets up a task force and has a study and does a survey and interviews people and crafts something and studies what a mission statement is supposed to do. We [Shir Tikvah] did none of that. Everything was driven by passion and by heart. We knew what we believed and felt very strongly about the fact that we were people who were coming together to create a Jewish home were everybody was welcome; to participate in ritual and Jewish social justice and Jewish learning.”

When first creating their mission statement, Shir Tikvah did not go through the normal process involving studies, interviews, focus groups, etc. As a result, the mission statement was atypical. Nevertheless, this mission statement was one that, according to Rabbi Offner, when read for the first time, made everyone cry. In the same interview, Offner explained that when Shir Tikvah was formed, the community knew the beliefs they held, the values they believed in, and the ideas that they felt strongly about. Accordingly, the process of writing a mission statement was not a complicated one. Someone took a pen to a piece of paper and wrote out the values, and thus a mission that truly embodied Shir Tikvah’s values was created.1 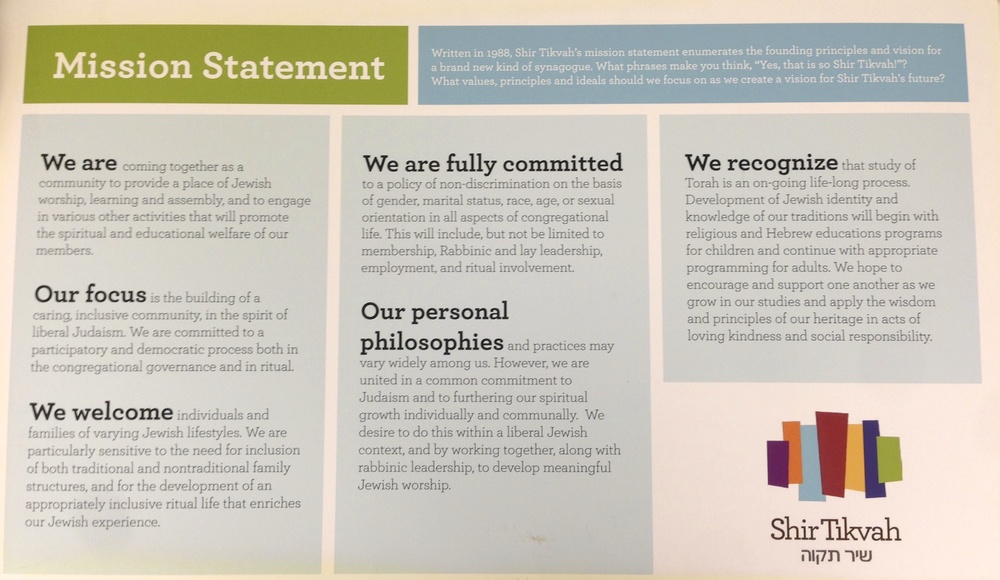 The original mission statement of Shir Tikvah from when the synagogue was first founded.

Although the original mission statement of the synagogue is no longer the overarching vision statement that is used, the values and ideals listed still play an enormous role in the synagogue today. The ways that the Shir Tikvah community carries out the ideas of their mission on a day-to-day basis is key to understanding the current life of the synagogue and the rich experiences it has provided to many.

John recounts instances of congregants helping out at Shir Tikvah.

“There's one woman who brings flowers in every weekend, and that's what she can do. She goes to her garden, she cuts her flowers, she brings them in, she arranges them, she sets them out and that's really sweet. We have other people who show up when it's snowing out and come shovel and that's great. Those are the things that people will jump in and do. We had a guy [who said] 'I noticed [that Shir Tikvah's] walkway was breaking up and I called the city but there going to charge you so I decided that maybe I'll go get a bag of cement.'"

Tony Nowike on the feeling of community and involvement he gets from Shir Tikvah.1

“The feeling that I get from Shir Tikvah that I don't get from any other experience I've had so far is that sense of community, that attention from the community, the involvement, the being in this place at this time and we're all kind of focused on the same thing and we're al interested.

The theme of being a holy community can best be understood in terms of what it means to be a member of the community that is present at Shir Tikvah. Being a part of Shir Tikvah means giving what you can without overcommitting according to Executive Director John Humleker. People do what they can in order to help maintain the synagogue and let it be all that everyone wants it to, and as a result many people feel that they have ownership in Shir Tikvah.5 This process of helping and feeling ownership is a circular one in that all who help feel a connection to and an ownership of the synagogue, and as a result feel that they should once again help. 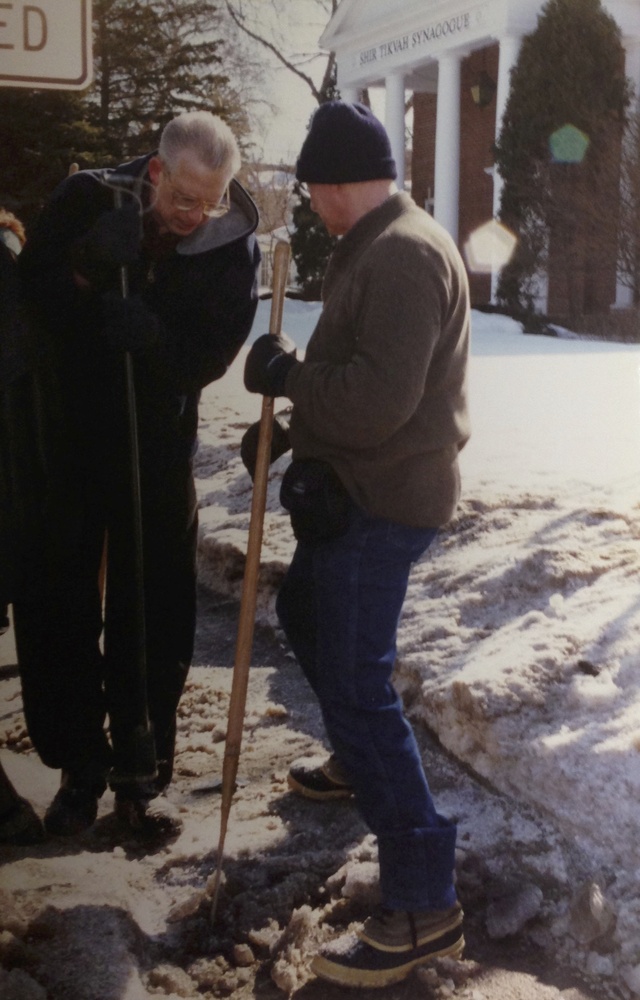 In an effort to help the synagogue in any way that they can, two members of Shir Tikvah help shovel the sidewalk.

Rabbi Melissa Simon talks about the diversity of the congregation.

“We have a young woman who grew up in our congregation who was adopted from Korea, and there's another little girl who also was adopted from Korea from a different family. One of the things I always loved seeing was them together. Neither one of them doubts that you can look Korean and be Jewish. They look around and they see a lot of diversity in our congregation and they know that there is not one way that [being] Jewish looks like. The fact that they could use their synagogue community as a place to kind of connect and come together and say these are all the parts of who I am, that is something that I really treasure.

Those who give what they can, whatever that may be, and are a part of Shir Tikvah have the opportunity to engage in a community that has a strong emphasis on the relationships that are formed. 6 Shir Tikvah is a community that strongly encourages partnership, seeking out the strengths of all members, and treating others with kindness. To attend Shir Tikvah is to know you will have a community just by showing up, according to Rabbi Melissa Simon. People at Shir Tikvah truly care about each other, and that draws a lot of people in.7 The importance of these relationships and their value within the community can be seen through the ways that the community is encouraged to engage with each other, such as the time given during services to greet and talk to neighbors, but also through the ways that Rabbi Latz and other staff interact with the community on a very personal level.