[I could] walk in from another faith tradition and feel safely supported to explore Judaism and the Reform liberal congregation of Shir Tikvah. —Katy Campbell

The ideas of Torah study, of prayer, and of justice are ones that fit into much bigger themes and parts of what makes Shir Tikvah the unique place that it is; education, service, and social justice. While the themes of a holy community and of radical hospitality that the community mainly engages in without direct instruction or action, the other three big ideas present in Shir Tikvah’s mission statement are ones that must actively be worked at and are engaged with using more explicit behaviors. The themes of Torah study, of prayer, and of justice are ones that are discussed in much more detail in future pages, but there is one example that fully epitomizes not only these values, but Shir Tikvah in general. This scenario took place at a Bar Mitzvah for someone who did not have very many Jewish friends and took place during the Torah service. Standing at the front of the congregation, Rabbi Latz announced that since he knew that many of the boy’s friends and family had never been to a Bar Mitzvah before, he wanted to give everyone a chance to come up and see the Torah in order that they fully understand the experience. In a very picturesque moment, the guitar was playing as family and friends came up to learn about what the Bar Mitzvah boy had experienced with help and explanation from a Rabbi. The principles of Torah study, and prayer, as it was during a Bar Mitzvah, were very present in that moment. Some might even say that the principle of justice was being considered. 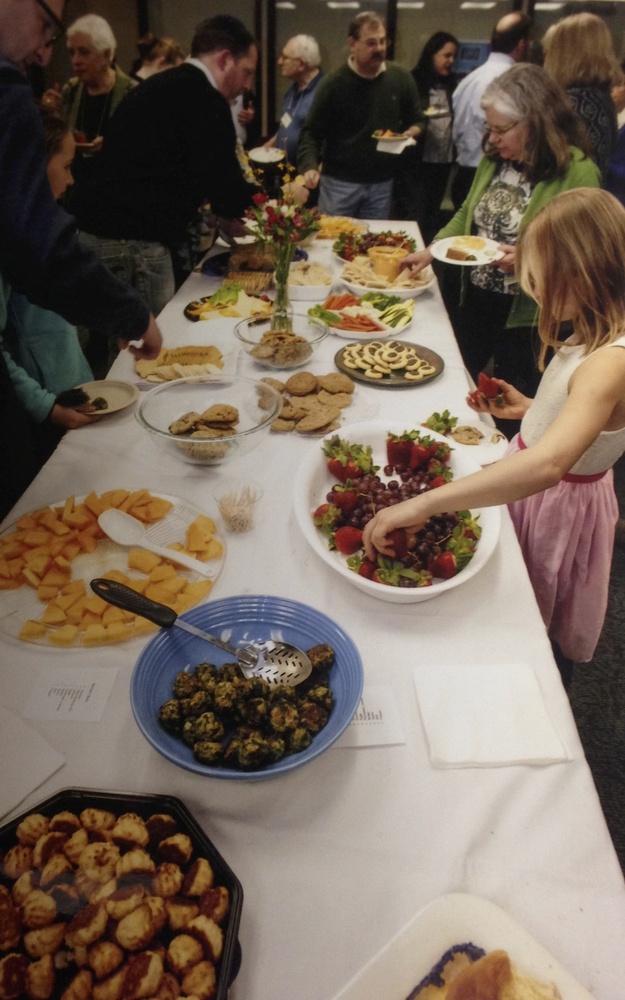 One of the themes discussed in the original mission statement, the theme of acceptance, is extremely important to the congregation, and people never fail to mention it when discussing the values and ideas at Shir Tikvah’s core. There are many ways to define acceptance, yet these definitions have much in common and seem to be very similar in practice. John Humleker explained acceptance as “accepting people for who they are and not necessarily [putting] labels because someone is not religious enough or too religious.8 ” Eric Brook, a member of Shir Tikvah, explained that at Shir Tikvah acceptance means that “if you’re [there] then you probably belong [there].” Eric did however explain that there were few non-negotiable criteria one must meet in order to be accepted into Shir Tikvah including the rule that if a child is in a religious education program at Shir Tikvah, he or she cannot also be enrolled in a religious school program somewhere else.9 Rabbi Melissa Simon, Shir Tikvah’s Director of Lifelong Learning, explained acceptance by articulating the story of humankind being made in the image of God, and therefore, “we need to treat everyone as created in the image of God."10

Wendy Goldberg shares an example of a gay couple who joined Shir Tikva because they felt accepted there.

“So there’s a gay couple who is older, there are in their 60s, we have many gay couples who have been together 30 years, 40 years. They were members of another synagogue and they did not want to come here, this was known as the gay synagogue, they didn't want to come here because they didn't want their identity to be wrapped up in they are gay and that's why they are here. They wanted to be able to be Jewish, and older, and gay, at their synagogue. They didn't want to have to have to hide out or marginal themselves. They really wanted to be out and accepted and at the synagogue of their parents legacy. At a certain point they just felt like [Shir Tikvah] feels better and that they could be more of themselves by being in this pot than by being in that pot. So their leading identity may or may not be  [LGBTQ] but they eventually made the shift and felt that that [Shir Tikvah] feels accepting.”

Although the idea of letting people in and treating them correctly is extremely important, many at Shir Tikvah believe that there is more to the idea of acceptance than just that. Katy Campbell, a member of Shir Tikvah who converted to Judaism, explained that to her acceptance means that she could, “Walk in from another faith tradition and feel safely supported to explore Judaism and the Reform liberal congregation of Shir Tikvah."11 At Shir Tikvah acceptance not only means helping others feel welcome and recognized, but it also means that the community actively takes the steps to help everyone feel that way. For example, on any given day at services, board members and other leaders in the community will wear nametags in order to help strangers to the community access what they need. Acceptance often spills over into the idea of inclusion in that the community works hard not only to ensure people are comfortable, but to ensure that people are welcome. This goal is not always achieved, as is explained by Music Director Wendy Goldberg when she states that, “[Shir Tikvah] is not fully inclusive of anything that walks in the door.” The example of the need for an interpreter was given, where Shir Tikvah does not always have an interpreter, but would always be very accepting to those who needed one. Wendy explains, however, that “[Anything that walks in the door [Shir Tikvah] will figure out how to be inclusive of,” demonstrating the desire for acceptance and inclusion within this community.12

Shir Tikvah is a rainbow congregation, with families of many races, and there are many families with adopted children from Asia, Ethiopia, and other countries.

One place where these themes of acceptance and inclusion have come about in the new vision statement is the idea of radical hospitality. This topic is the community’s main theme this year, and can be seen incorporated into sermons and classes as well as in more implicit ways. In addition to the nametags that members wear, Shir Tikvah has begun a program where new members' pictures are put up on a board within the building.The idea of radical hospitality comes from the story in Genesis where Abraham welcomes the strangers, who he later learns are angels of God, into his tent. In an interview with Robin Doroshow, a member of Shir Tikvah, the symbolism present in this Genesis story were evoked she stated that radical hospitality is about, “welcoming everyone under the big tent."13 The theme of radical hospitality goes beyond the idea of acceptance, it incorporates the same ideas as inclusion. It strives to answer the question of how people can be met where they are so that they truly feel a part of Shir Tikvah’s community?

Chris Bargeron recounts a story of how he felt welcomed at Shir Tikvah by being asked to do a simple act.

“One day I came to a special service that was organized to pray for, I think it was a bombing of an LGBT youth center that had been bombed, and so [we] wanted to come together. There was a service organized and I just showed up. I was on the early side, and there weren’t a lot of people there yet, and Rabbi Latz said ‘here would you hand out programs.” And it was such a simple thing, and he probably was thinking “well, I need somebody to hand out programs.” But being able to have something to do, was so excellent to me, it was so helpful. It made me feel that I didn’t have to stand here like a potted plant, even though didn’t know very many people. But it also said I was here and I was part of that place and I actually got to welcome people.”

Although the theme of radical hospitality is a new one in the community, in discussing what she saw as the important values of Shir Tikvah, Rabbi Offner explained exactly how she thought this radical hospitality should look. Offner stated that, “[Shir Tikvah] does Jewish things, and anyone who wants to do those Jewish things with [them] is welcome to do so.”1 While anyone is welcome at Shir Tikvah, and the community is in fact very diverse, the main way that this diversity plays out is through sexual orientation. LGBTQ equality is at the core of Shir Tikvah as it was a part of the founding of the synagogue and continues to be important to the community today. Diversity can be seen in other ways as well, however. Shir Tikvah is a rainbow congregation, with families of many races, and there are many families with adopted children from Asia, Ethiopia, and other countries. Occupations of Shir Tikvah members are all across the board as well, ranging from those who are unemployed to very successful doctors and lawyers, with quite a few legislators being members of the congregation as well. Members of the community have all different relationships with Judaism, some who grew up in Jewish homes with the same ideas presented as those at Shir Tikvah, those who grew up with completely different conceptions of Judaism, and some who made the choice to convert to the religion.2

Despite all of these differences, Shir Tikvah hopes to welcome all of these people into their holy community in order to give everyone a place where they can connect to Judaism in whichever way they see fit. While there are of course times when the goals are not met, and there are limitations to many of these ideas, Shir Tikvah makes use of the idea of intentionality in hopes of being successful with it’s mission. There is not only value in recognizing what is being done, but also in realizing and thinking about why. Shir Tikvah and the members of the community ask the questions of why in addition to the questions of how, as well as the best ways to transform that which needs to be fixed, making the community successful in much of what it does.