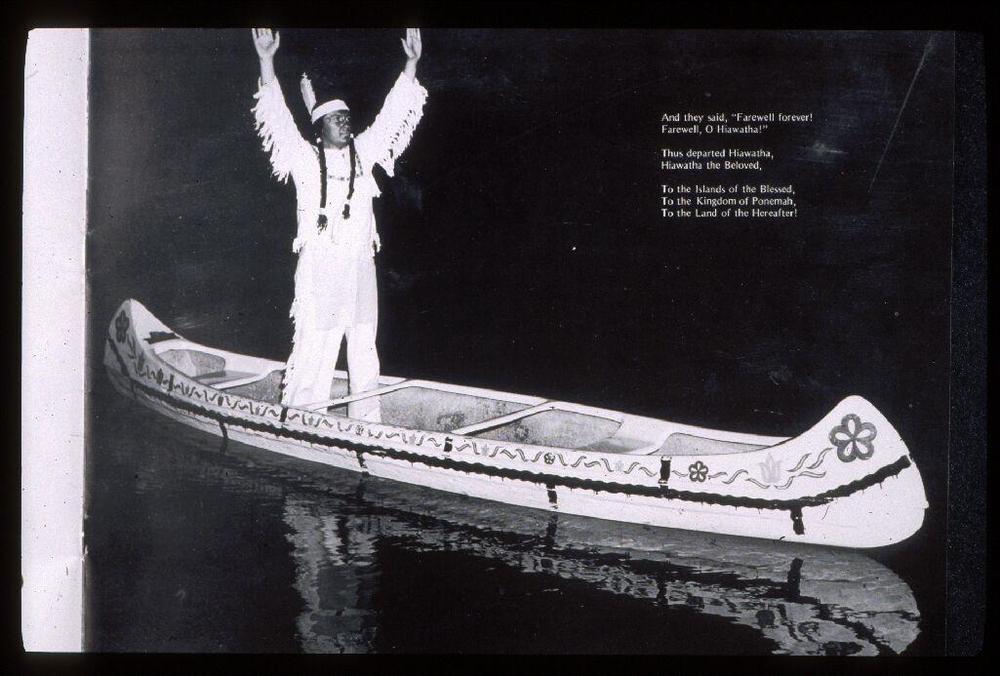 Dramatic final scene from Pipestone Hiawatha Pageant, where the hero Hiawatha departs towards the setting sun in an Enchanted Canoe, leaving his people in the hands of the "Black Robe" missionaries.

Although tourism is important to the town’s economy, it appears to be a legacy of a by-gone era. The grand quartzite buildings along Main Street only heighten the shabbiness of the town’s more recent architecture. According to locals and Park Service employees, the majority of the town’s visitors are touring America’s National Parks in RV campers, Europeans on a vacation, or Native Americans coming to quarry at Pipestone or to celebrate the annual Sun Dance held every summer at the Pipestone National Monument. There is no camping in the park itself; visitors usually stay in one of the town’s two RV parks, the Super 8 Motel, or the cavernous Historic Calumet Inn on Main Street.

I look around, and I see these peace pipes here and there, and I wonder, do these people really know what that means? To display a pipe in certain ways is disrespectful. —Ray Derby

The most notable display of wealth in the town is the vast lot of industrial agricultural equipment found at the edge of town. Ray Derby, son of Chuck Derby, an informal leader in the Dakota community in Pipestone, left the town of Pipestone for thirty years to pursue a career in the information technology business. He believes, “not a lot of people stay here after they graduate [high school], unless you’re part of a farming family with a big outfit of town. The economy didn’t support the kind of things I went to school for. I had to move to where the jobs were, so I did.”

Derby remembers a time when tourism was more profitable at Pipestone, but also questions the way tourism functions in relation to the Sacred Pipe. He recounts here about the tension between tourism and respect for Indian culture:

"This town was built around the Indian culture, because tourism in this town was huge when I was growing up. There was a time when they ran three [The Song of Hiawatha] pageants a week on the grounds, and I remember seeing twenty buses out in the parking lot was overflowing with tourists, all built around the Indian culture. I look around, and I see these peace pipes here and there, and I wonder, do these people really know what that means? To display a pipe in certain ways is disrespectful. I know we have displays here on our walls, but that’s why we have sage in them. None of the bowls are connected to the stems. If you go back and look, none of [the pipes they have in the museum] have been awakened. As long as they haven’t been awakened in ceremony, I don’t see anything wrong with this."

Not all people of Indian descent think the pageant was a bad thing. "They're trying to do something good,'' says Travis Erikson, a pipemaker of Dakota descent who demonstrates his craft for visitors at Pipestone National Monument. "Back when [the pageant] started, we had very few avenues for people to learn about Indian culture but now we have many."1

Back when [the pageant] started, we had very few avenues for people to learn about Indian culture but now we have many. —Travis Erikson