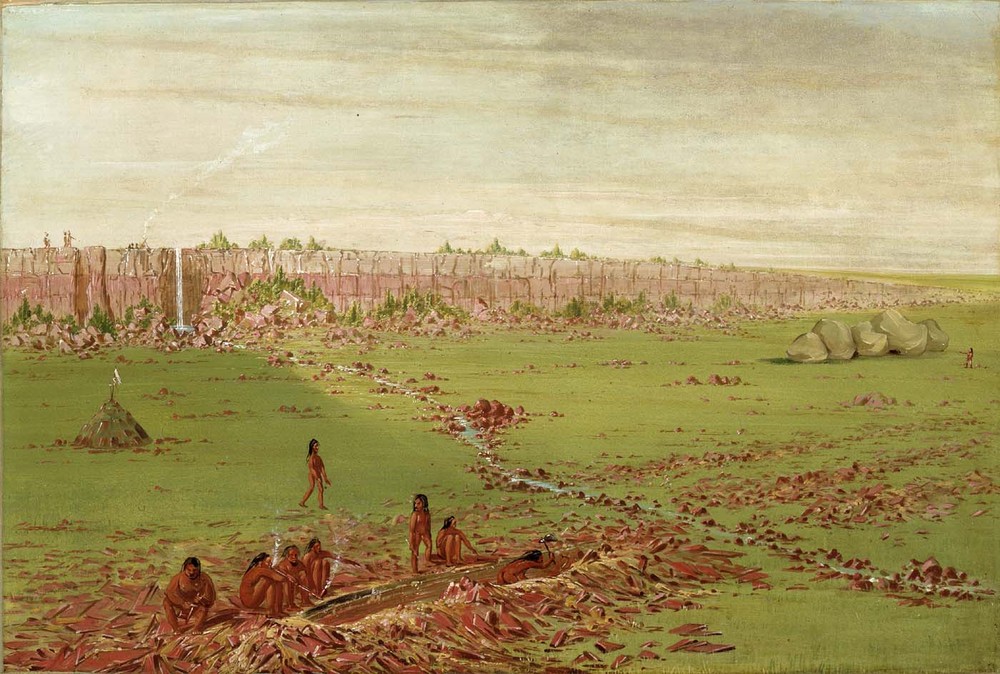 In the 1830s, George Catlin's paintings of Pipestone popularized the quarries in the minds of many white settlers on the east coast. 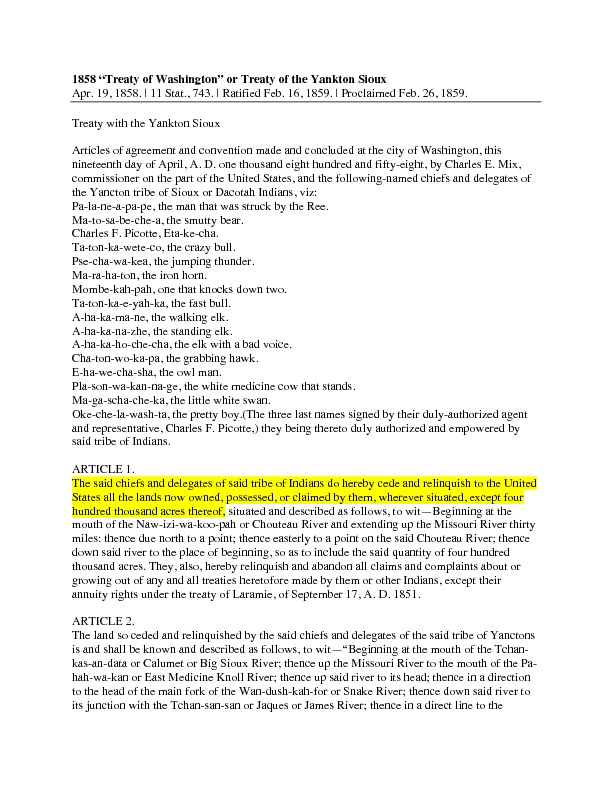 For a long time, the quarries were a site of peaceful communication and trade among a variety of Native and European groups. Before the presence of European settlers, different Native groups quarried stone as they traveled through the Pipestone area. These communities generally understood the quarries to be neutral territory, meaning no specific tribe controlled the quarries. Furthermore, pipestone was commonly circulated between tribes through trade. European settlers arriving in the 17th century also participated heavily in the pipestone trade. Native communities often smoked the pipe as a key part of diplomacy and treaty making, including the treaties that ceded the region's land to the United States. This sort of multi-group access to the quarries changed around the year 1700 when the Yankton Nakota (Sioux) moved west and established their permanent residence in the area of the quarries. Over time, they consolidated power and took control of the quarries and the pipestone trade.

In 1836 famous painter and writer George Catlin arrived, documented the quarries, and popularized them in the imagination of many European-Americans in the eastern United States. Catlin claimed to be the first white man to visit the quarries, though several fur trader’s diaries show they were there before him.8 Catlin’s writings inspired the poet Henry Wadsworth Longfellow to include the quarries in his epic poem The Song of Hiawatha, though Longfellow never visited Pipestone himself. Catlin also popularized the term “peace pipe” when he described the quarries as a site of tribal peace. Whether he was the first white man to visit the quarries or not, Catlin (and his paintings) shaped historic as well as contemporary perceptions of Pipestone.

"The said Yancton Indians shall be secured in the free and unrestricted use of the red pipe-stone quarry, or so much thereof as they have been accustomed to frequent and use for the purpose of procuring stone for pipes; and the United States hereby stipulate and agree to cause to be surveyed and marked so much thereof as shall be necessary and proper for that purpose, and retain the same and keep it open and free to the Indians to visit and procure stone for pipes so long as they shall desire."9  —1858 Treaty of Washington 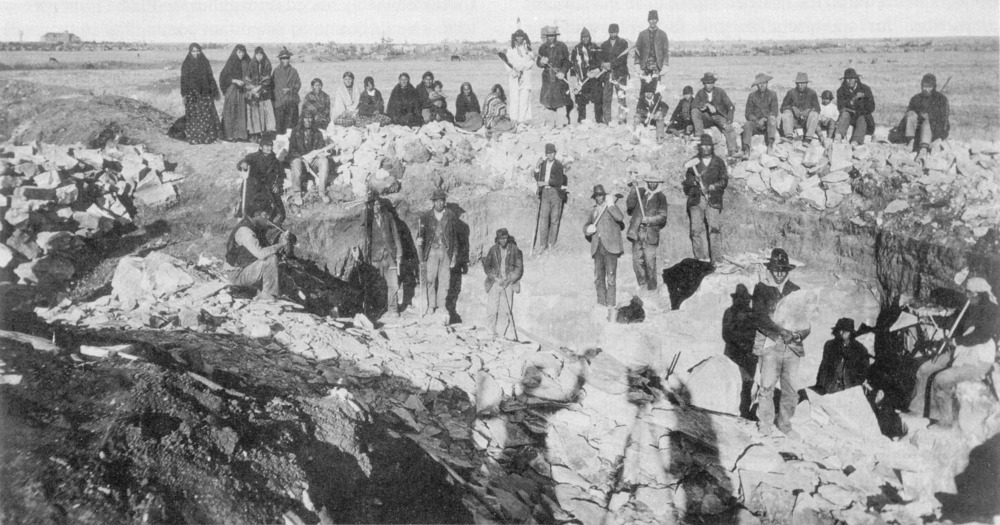 This photograph of a pipestone quarry in 1894 shows Big Thunder (John Wakerman), a Santee Sioux, standing in the center with white gloves.

In 1851, the Sisseton and Wahpeton Dakota signed the treaty of Traverse de Sioux with the federal government ceding land in southern Minnesota to the U.S. government. The Yankton Nakota were not part of this treaty and were upset by Sisseton and Wahpeton claims to the pipestone quarries. In 1858 the Yankton signed the Treaty of Washington with the United States government that recognized the Yankton's continued, exclusive ownership of the quarries and rights to regulate quarrying. In the words of the treaty, the Yankton Indians were granted, “free and unrestricted use of the Red Pipestone Quarry."1 In return for access to the pipestone, the Yankton gave up all land in the vicinity except for the one square mile where the quarries were located. 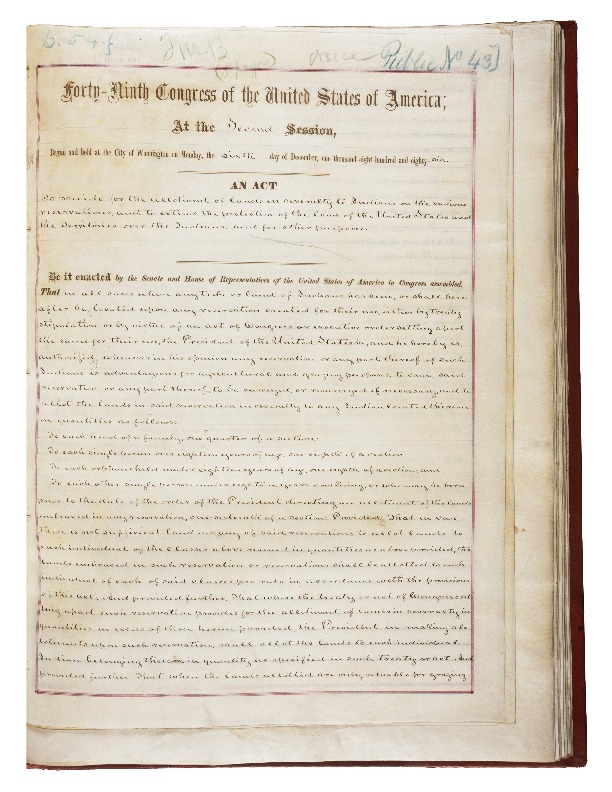 Ignoring the treaty, European settlers illegally claimed and built upon reserved portions of the land granted to the Yankton Indians. European settlers also used the quarries and sacred pipe traditions for economic purposes. By the 1860s, catlinite pipes were mass-produced from the Pipestone, Minnesota quarry for trade to Native people. It was estimated that between 1864 and 1866 the Northwest Fur Co. manufactured nearly 2000 pipes for trading purposes.2