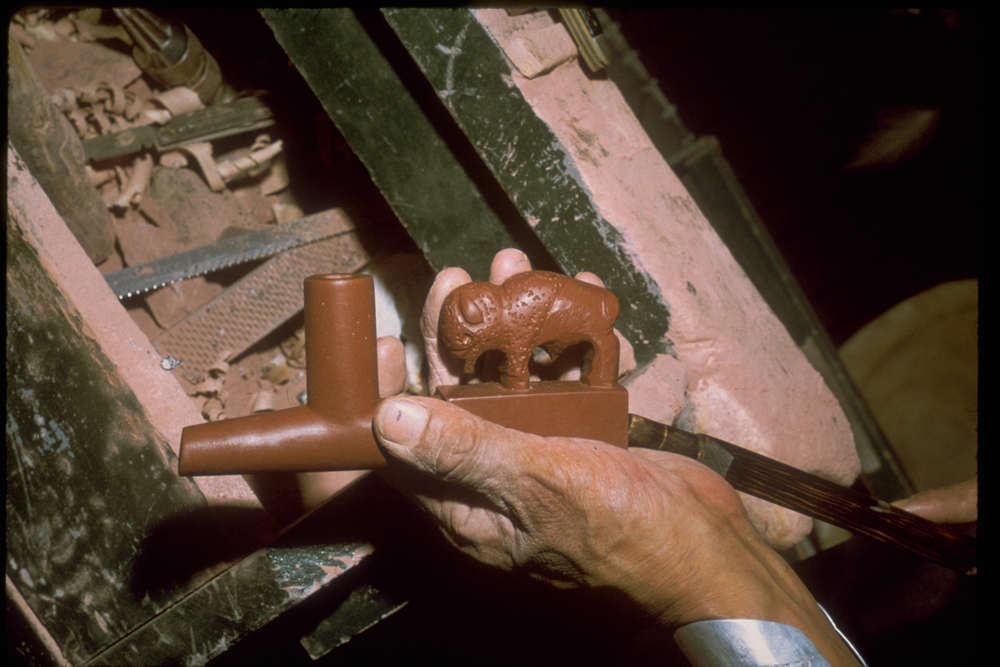 Sacred pipes are carved by a variety of Native people for both commercial and religious purposes.

Sacred pipe ceremonies form a central part of Native American ritual practice in many Indian cultures. Among the Dakota residents of Pipestone and environs, praying with a pipe is a focal point of religious practice; the story of the gifting of the Pipe by the spirit White Buffalo Calf Woman, including her instructions to the people about how to pray, is one of the most commonly told among the community. Praying with the pipe is an element of practice at Sweat Lodges, during the Sun Dance, and in other Dakota/Lakota ceremonies and healing rituals.1 In a documentary produced by the National Park Service played at the Pipestone monument, William Mesteht of the Oglala Lakota tribe says, “Of all the items, the sacred items, the Lakota people have, [the sacred chanupa (pipe)] is the most central item in our culture."2

White Buffalo Cow Woman who brought our sacred pipe will appear again at the end of this ‘world’. —Black Elk (Lakota)

Black Elk (1863-1950) was an Oglala Lakota (Sioux) holy man whose views on Lakota tradition, including the use of pipestone, were recorded by scholars John Neihardt and Joseph Epes Brown. Baptized in 1904, Black Elk was also the Catholic catechist (a teacher of the principles of Christianity) on the Pine Ridge reservation for many years. Black Elk taught that the sacred Pipe was part of a variety of Native cultures well before European contact.3 Despite his commitment to Catholicism, by the end of his life Black Elk is said to have told his daughter: “The only thing I really believe is the Pipe religion."4 Black Elk’s teachings were consolidated into the famous Black Elk Books.5

In The Sacred Pipe: Black Elk’s Account of the Seven Rites of the Oglala Sioux, Black Elk explains the origin of the sacred Pipe:

It is the will of Wakan-Tanka, the Great Spirit, that an animal turns itself into a two-legged person in order to bring the most holy pipe to his people; and we too were taught that this White Buffalo Cow Woman who brought our sacred pipe will appear again at the end of this ‘world,’ a coming which we Indians know is now not very far off.6

The first rite in the book describes how a woman, who is later revealed to be a spirit, presents a sacred pipe to the Lakota people “very many winters ago.” Describing the centrality of pipe prayer for Lakota belief, White Buffalo Cow Woman tells the Lakota, “When you pray with this pipe, you pray for and with everything.” Participants in a pipe ceremony, pray to “all my relatives” through the pipe, a category that encompasses the quadrilateral universe. Clearly, sacred pipe ceremonies are central to Dakota and Lakota sacred narratives, history and contemporary prayer practices.