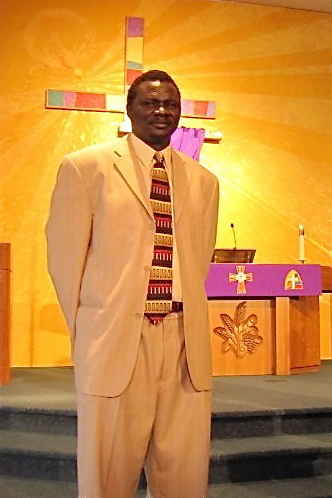 Wal Reat was born in Nasir, South Sudan, in 1970. Although Wal enjoyed living in Nasir, he says that growing up in the midst of civil war was extremely difficult. When fighting reached the Nasir area in 1983, Wal and others from his village fled to a refugee camp in Ethiopia.

However, Ethiopia was enduring a war of its own, and when rebels expelled the Ethiopian government in 1991, Wal left the refugee camp and returned briefly to an area of southern Sudan that had been liberated from the civil conflict.

In 1992, Wal entered another refugee camp near the Kenyan border. When this camp was air bombed, Wal was forced to move once again and settled in the Kakuma Refugee Camp in northwestern Kenya. Wal stayed in Kakuma from 1992 to 1994, when he moved to the Ifo Refugee Camp near Dadaab in northeastern Kenya. It was here, in Ifo, that Wal received his offer to resettle in the United States.

Wal remembers the exact day that he came to the United States. On June 21, 1995, Wal arrived in Sioux Falls, South Dakota. After six months of searching for a job with no success (John Morrell, the meat packing company, refused to hire Wal because he lacked experience in the industry), Wal moved once again, this time to Tennessee. In November of 2000, Wal moved to Faribault, Minnesota, where he currently leads Sudanese worship services at Nile Our Savior Lutheran Church.

Although Wal is thankful that he was able to leave behind the fighting and refugee camps that characterized most of his life in Africa, it has been difficult to begin a new life in the U.S. Wal’s brothers and sisters remain in Sudan, and his wife and two young children currently live in Ethiopia. Wal somberly notes: “I miss people. My family, all my people and my brothers and sisters, my children, my wife, and my relatives and friends. I miss them. I miss colleagues from the churches…I miss them a lot.”1

Both of Wal’s children have gotten United States passports and were able to join Wal in Faribault, but his wife has had difficulty obtaining a visitor’s visa. Though Wal misses his family profoundly, he explains that his mission to become ordained as a pastor and to bring God to the people of South Sudan is so important that he doesn’t need his family to be with him in the United States.

“I miss people. My family, all my people and my brothers and sisters, my children, my wife, and my relatives and friends. I miss them. I miss colleagues from the churches…I miss them a lot.” —Wal Reat

Wal Reat talks about how he feels about being away from his family and his mission to spread Lutheran teachings.

"So, the experience I got here [in the U.S.], I feel in my heart to give it to people who need to know God. And the way we, you guys preach, [the way] the pastors preach here, it is different than the way we do. Because over there nobody trains the people…When I get this TEEM, I told them no, I don’t need my family to be here, because I feel inside myself [that] we’re behind. We’ll miss, you know, the way we could get God. We worship a lot, but nobody gives people direction how to do it. It make me feel like I got to go home [to South Sudan], to help those people."

As Wal mentioned, in 2012 he was taking TEEM (Theological Education for Emerging Ministries) classes, part of a specialized program through the ELCA (Evangelical Lutheran Church in America) for immigrant groups and congregations in remote locations. He said that once these classes were finished, he would be eligible for ordination as a Lutheran pastor. Wal was also hoping to return to South Sudan in the summer of 2012 in order to visit the churches he had helped establish there. Wal explained that he is very excited to be an ordained pastor and to eventually return permanently to Sudan where he can live with his family and bring Lutheranism “back home.”2 Sure enough, in 2015, Wal Reat moved back to South Sudan to be with his family, according to a receptionist at Our Savior's. As of 2016, he is still in Sudan and planning on staying there with his family for the foreseeable future. Our Savior’s hasn’t been offering Sudanese worship services since his departure and the future of the Sudanese congregation there is unknown.