A History of the Scholarship on the Nuer of Southern Sudan 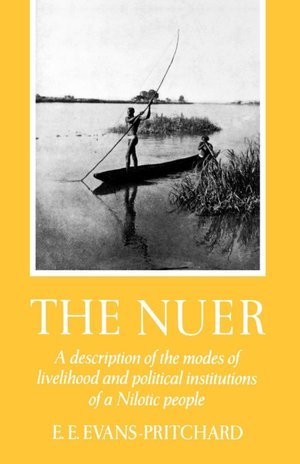 Classical anthropological studies of the Nuer tribe of southern Sudan are perhaps the most well known in the history of the discipline. Made famous by the writings of Sir Edward Evans-Pritchard, the Nuer are agro-pastoralists and members of the Nilotic cultural/linguistic group.1 Evans-Pritchard’s trilogy–The Nuer: A Description of the Modes of Livelihood and Political Institutions of a Nilotic People (1940), Kinship and Marriage among the Nuer (1951), and Nuer Religion (1956) – documented Nuer society and culture and largely contributed to the construction of the discipline of anthropology. Likely, no other ethnography has received so much praise, while simultaneously receiving so much criticism, as Evans-Pritchard’s accounts of the Nuer. His work is highly problematic for a number of reasons, including his treatment of the Nuer as a “primitive” civilization and his characterization of the Nuer in terms of Western social classifications that fail to describe the true nature of Nuer society.

Later well-known anthropologists and sociologists including, among others, Victor Turner and Mary Douglas drew upon Evans-Pritchard’s work on the Nuer. Based upon their work, major concepts and theories about liminal processes and boundary making were developed. Still, despite the early fascination with the Nuer of southern Sudan among scholars in a range of disciplines, few have considered the experiences of the Nuer in modern transnational contexts. Dramatic changes have occurred since the era of Evans-Pritchard and the early research that followed, and, as a result of the “globalization of migration,” 2 Nuer refugees have found themselves living far from their homeland in Southern Sudan; even finding themselves in rural Minnesota.

Despite the early fascination with the Nuer of southern Sudan among scholars in a range of disciplines, few have considered the experiences of the Nuer in modern transnational contexts.