One Congregation in Two Languages 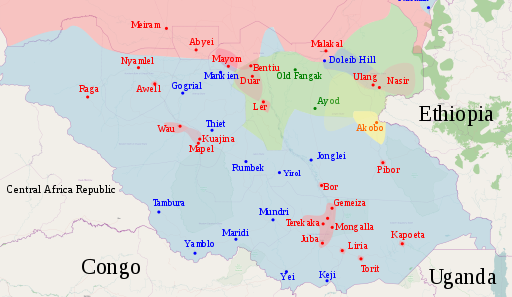 The day that Wal walked by Our Savior’s Lutheran Church and heard beautiful music marked the beginning of a long relationship between the Nuer and English-speaking congregations at Our Savior’s Lutheran Church.  While both Pastor Steve and Wal describe their church as “one congregation in two languages,” there have been some challenges in deeply integrating the two groups. The English-speaking members of the congregation have provided substantial financial support for Wal to travel back and forth to Sudan to train Sudanese people as Lutheran leaders. As a result, a strong relationship has been maintained between a small Lutheran community in the middle of the United States and groups of people in South Sudan. This is a striking example of the ability to build faith across borders in the modern world. That being said, within the small town of Faribault, Nuer and English-speaking congregation members spend very little time together and have created two mostly separate communities within the same church. The contrast between the strength of transnational connections and intra-communal relationships shows that a common faith can have varying effects across different levels of interaction.

[Wal] said ‘Steve, you need to come along with me so that you can see the situation there, so that the people can meet you, so that you can do some training with the lay leaders. —Pastor Steve

In 2006, after five years of worshipping at Our Savior’s, Wal and the Sudanese members asked Pastor Steve if the English-speaking congregation would help send Wal back to Sudan for a few months. At this time people were able to begin returning to their villages since there was a peace agreement in place between northern and southern Sudan. Wal wanted to see how things were going in Nasir, a town in South Sudan. The English-speaking congregation raised $1700 for Wal’s airfare, and the trip was a success. According to Pastor Steve, “He was there for three months, and in three months he started six churches.”1  By the time Wal returned to Sudan in 2008, his missionary efforts had expanded to eight churches.

[Wal] was [in South Sudan] for three months, and in three months he started six churches. —Pastor Steve

After this trip, Wal urged Pastor Steve to accompany him to Sudan.  As Pastor Steve recalls, “[Wal] said ‘Steve, you need to come along with me so that you can see the situation there, so that the people can meet you, so that you can do some training with the lay leaders.”2 In 2009, Wal, Pastor Steve, and another Sudanese member of Nile Our Savior Lutheran Church traveled to Sudan. For ten days they lived in the village of Nasir and stayed in mud and grass huts without running water or electricity. There, Pastor Steve trained about 45 leaders, both men and women, some of whom had walked as much as two or three days to get there.