The Night of the Iftar

On the night of the iftar, when one walks into the masjid, they are welcomed in by a registration table. There they search for their names, get a name tag, and are escorted to the downstairs cafeteria. When one arrives downstairs, they are greeted with 20 beautifully decorated tables with centerpieces, plates of dates, water bottles, and Ramadan greeting cards. 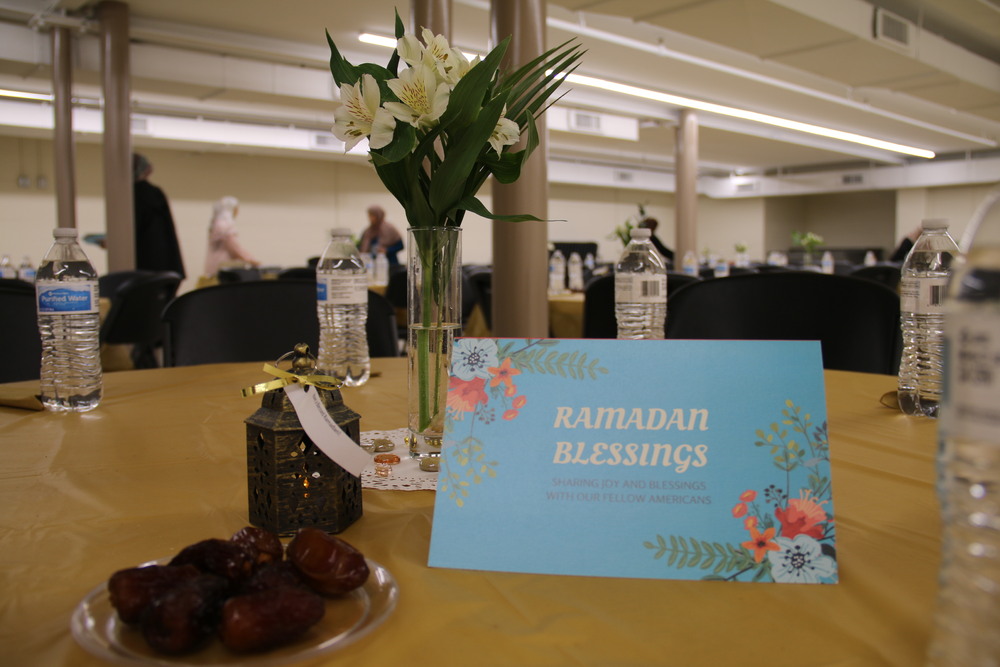 One will also notice that people of different faith traditions and backgrounds engaged in conversation. In the back of the room, the organizers are finalizing the details of the program. There is a tension of anticipation in the air, for there is a mix of veterans and newcomers. Every Taking Heart Iftar is just a little different, one never really knows the final space it will take.

At 7:50 pm, a man from the BCC community stands in front and introduces himself as the emcee for the night. He welcomes everyone to the masjid. Then, he invites the sheik of the masjid up to say some words. The sheik was not expecting to say anything, so he makes a handful of jokes. The audience laughs with him. The air was becoming more relaxed. Then the emcee invites a young man to recite a passage from the Quran.

"Who spend [in the cause of Allah] during ease and hardship and who restrain anger and who pardon the people - and Allah loves the doers of good" (3:134)

Then the emcee announces that there is a quick fifteen-minute presentation on the basics of Islam, a quick overview to help the conversations at the table. He invites up the presenter, who he introduces as his daughter. After her presentation, she opens it up for questions from the audience. One would imagine that there would be an onslaught of controversial subjects. Instead, there was an awkward silence. After ten seconds of silence, someone finally raised their hand and asked about the acts of charity the masjid does in Ramadan. (Here I can see a link to a future webpage on the social services that masjids in Minnesota provide). The sheik stood up and answered that the masjid has a food drive all year round, open door iftar for people who cannot always afford food to break their fast. Also, Muslims around the world pay zakat 1 .

The next question addressed why Eid is on June 4th and 5th on their calendar. The sheik explains how the Islamic calendar goes off of the moon cycle. This year Eid will be on June 4th. Another awkward silence filled the room. Then the sheik says, “Just because no one is asking questions that do not mean that the food will come faster.” Laughter filled the room, breaking the awkward silence. Another hand went up, asking questions about the way the young boy recited the Quran. Before another awkward silence could happen, Imam Asad says from the back of the room, “Why don’t we start the table conversations?” The emcee agreed, and the second he stopped talking, conversation filled the room instantaneously. It was as if a switch was turned on, causing conversations to happen at every single table at the same time. It was here I remembered what Iman Asad had brought up in the interview with him. Imam Asad Zaman said in his interview that the most impactful part of the Taking Heart is the conversations, not the presentations. 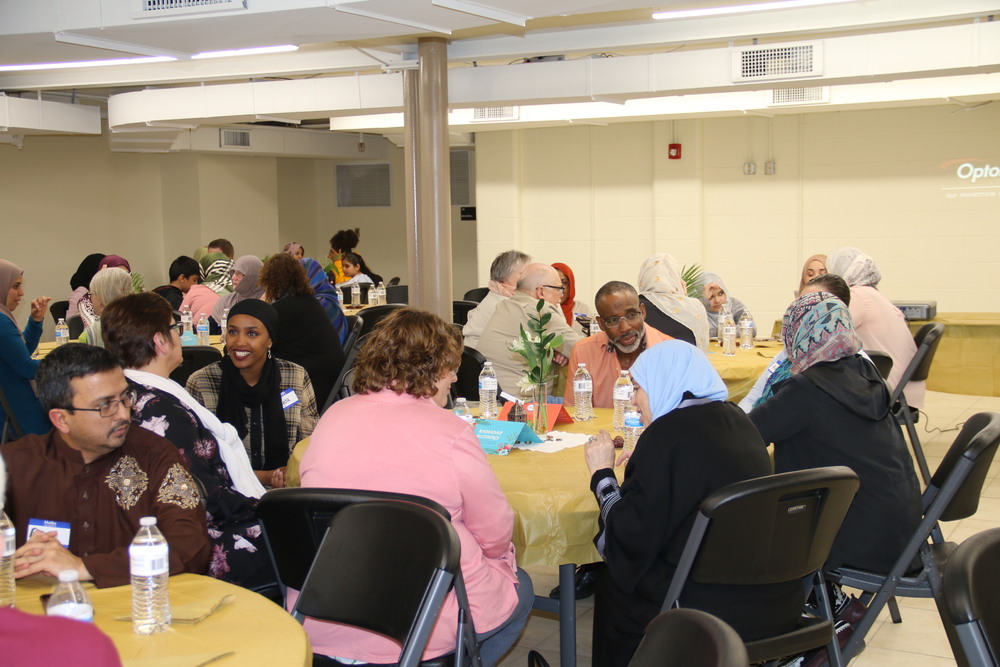 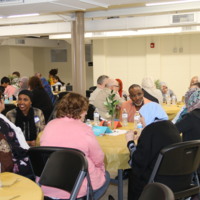 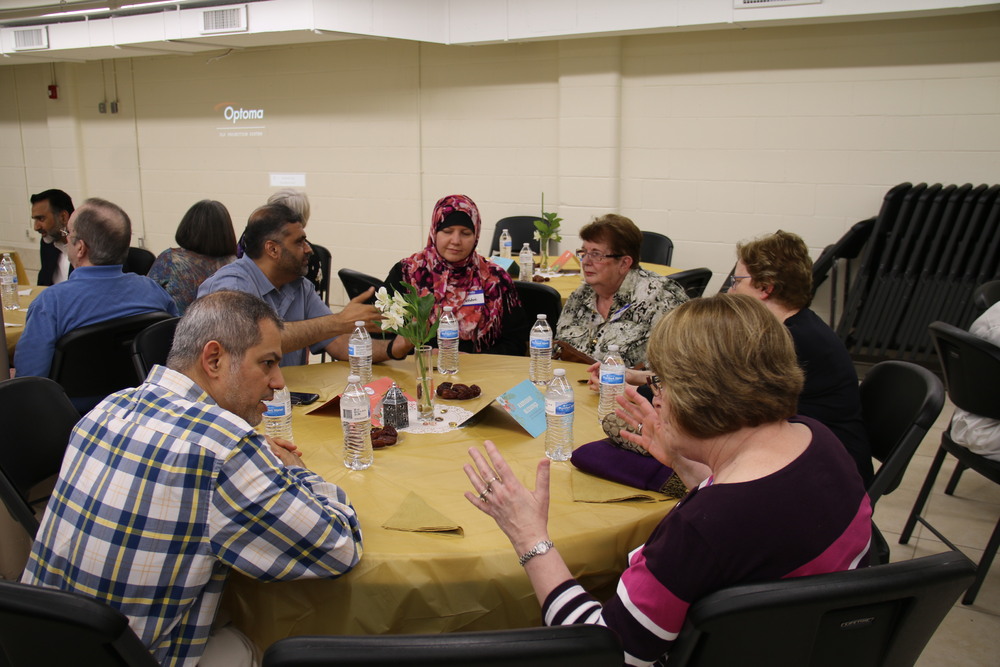 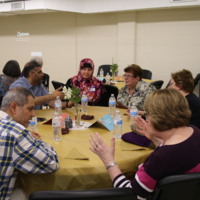 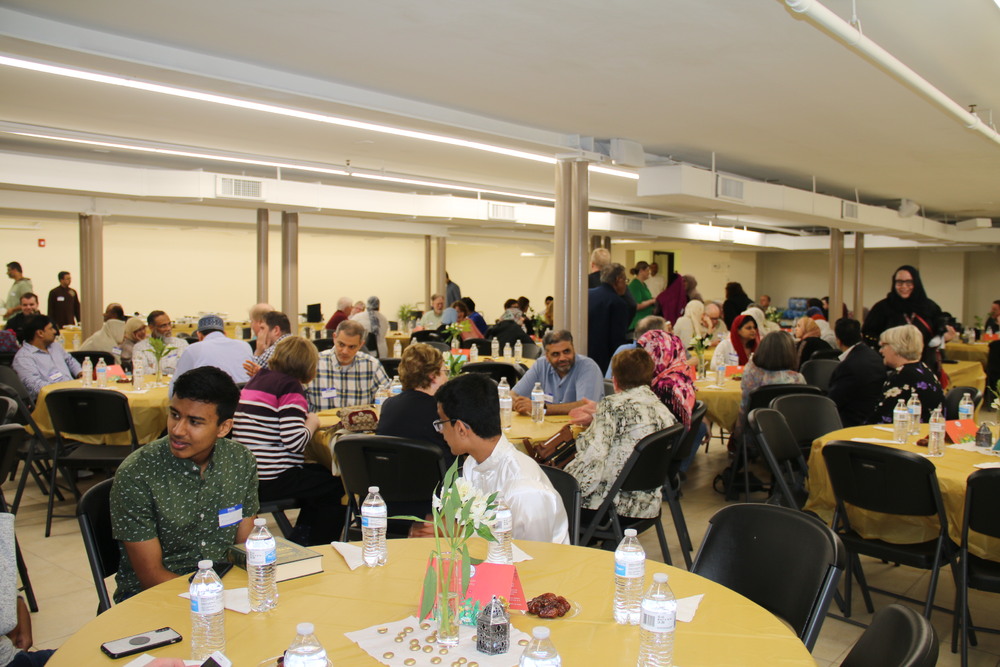 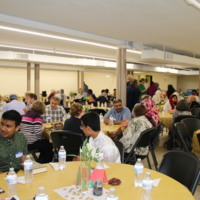 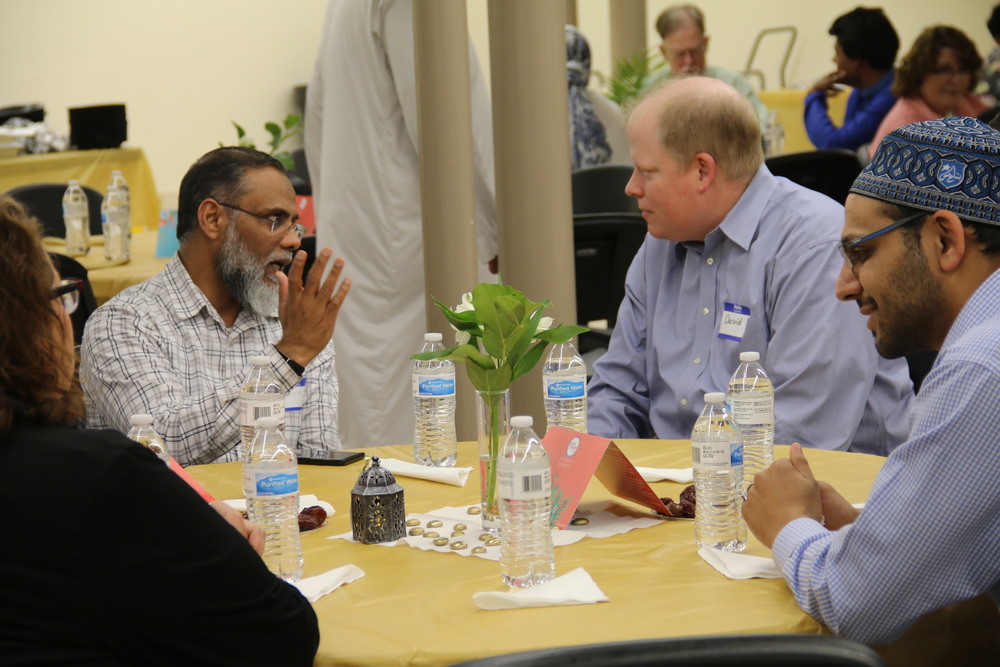 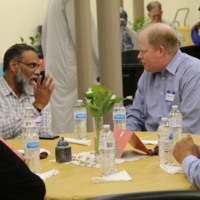 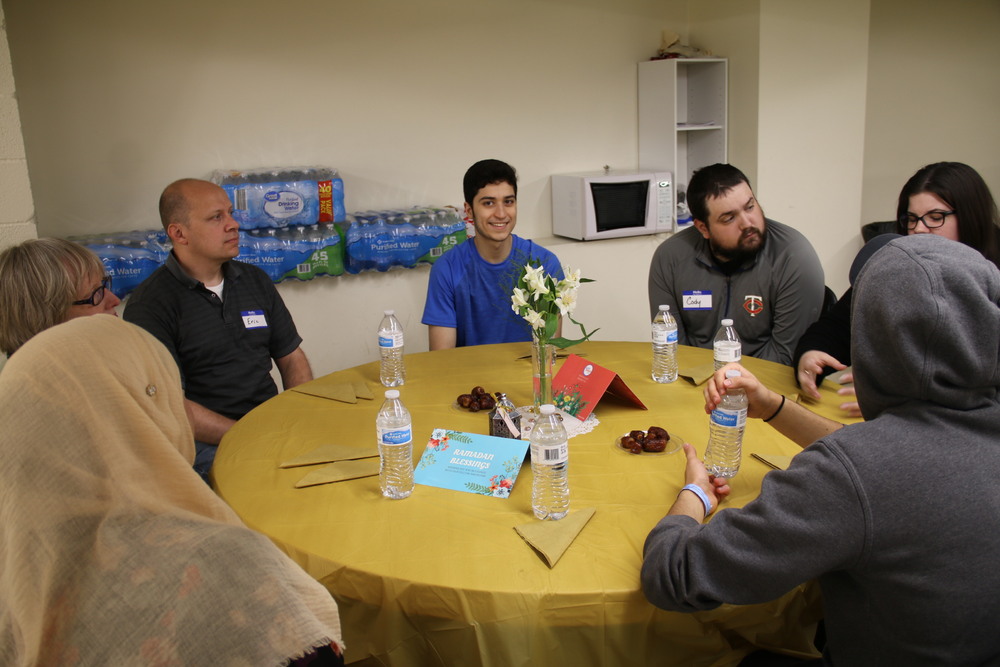 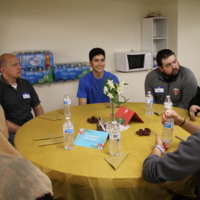 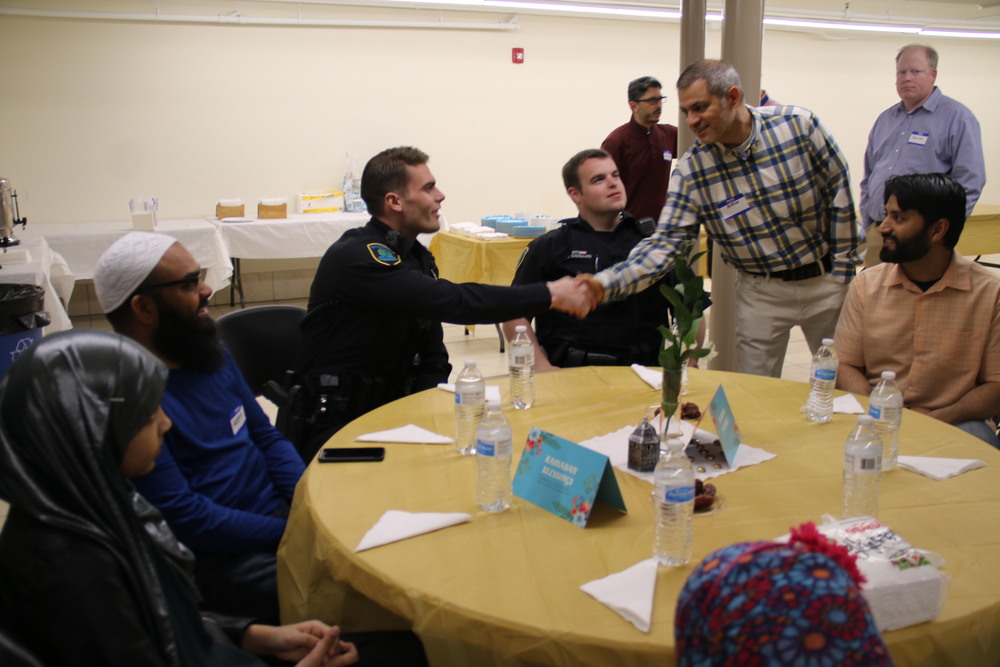 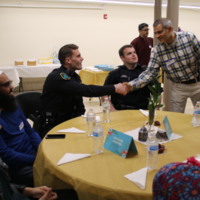 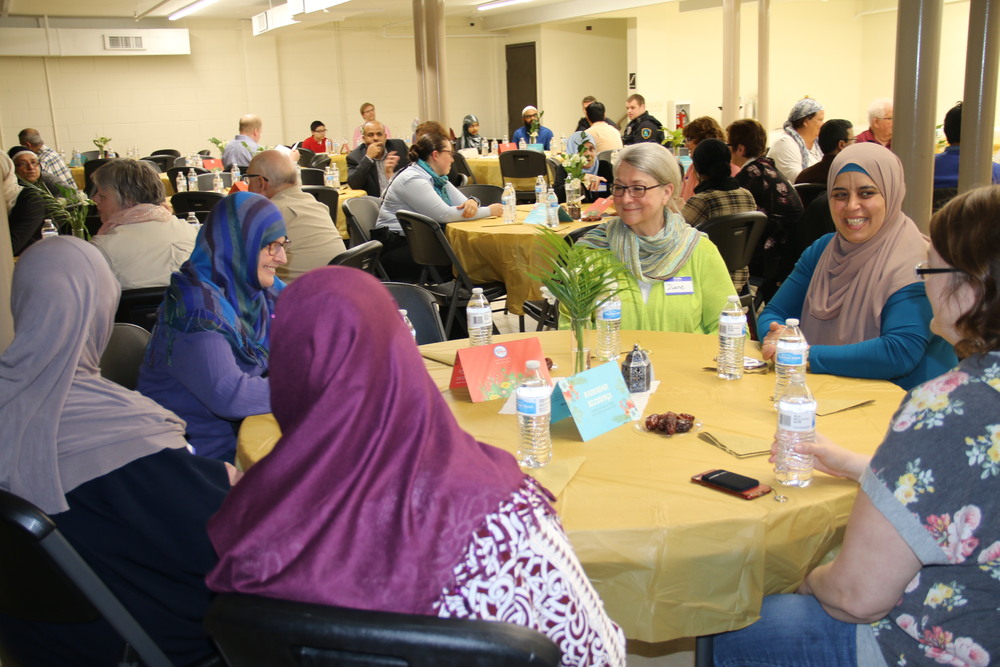 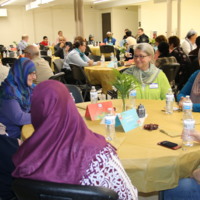 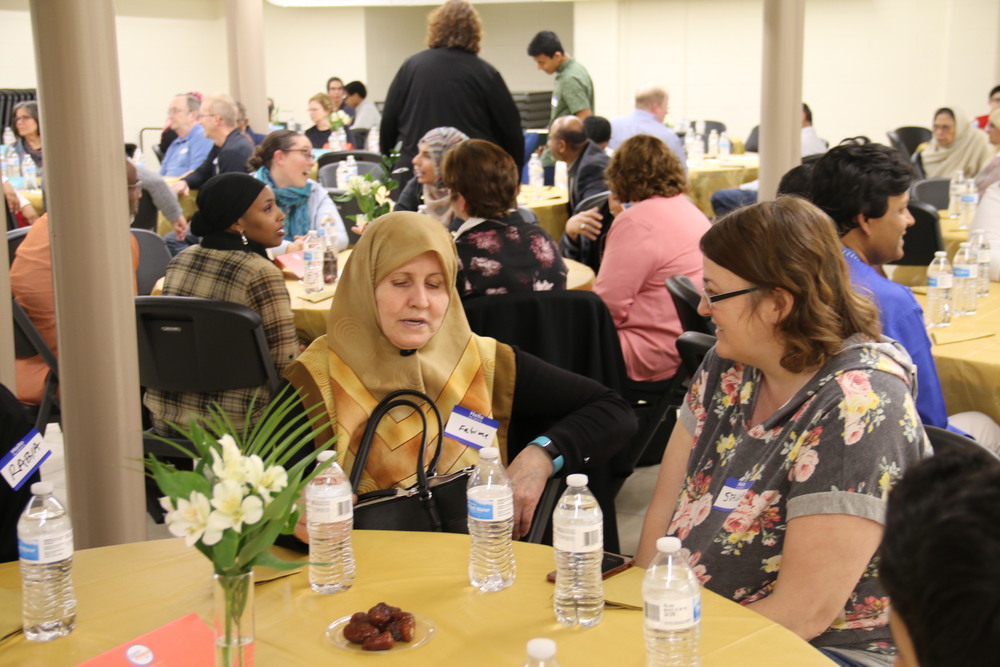 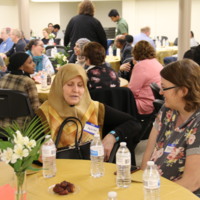 The most engaging and impactful part of the night was the conversation people had at their tables. There was such a wide range of topics: struggles of parenting teenagers, the reason why the date of Eid changes, the insane winter everyone survived through, the similar prophets between faith traditions, and more.

There were laughter and smiles, business cards swiped, faces of people in deep conversation, and children running around making faces at the people with cameras.
At 8:35 pm, the call for prayer flooded the room through the speaker system. The conversations ended in an instant as people began to pass around the dates to break the fast. At most tables, the Muslims would hand the non-Muslims dates before taking one for themselves, even though they have been fasting since dawn.

After breaking the fast with a date or three, most guests headed upstairs to the prayer area. The ones not praying stood respectfully to the side out of the way of the prayers. Afterward, everyone headed downstairs for dinner. The line was long and full of folks conversing with one another. Once everyone got their food, they found a seat and continued their conversations or mixed it up and sat down with new people.

These were real people having real conversations. Yes, this event occurred in a place of worship, but the discussions could be copied and pasted into any situation. As the night continued, people got more comfortable and more intimate. The night was a success.