Woodland Hills is part of Converge Worldwide, an organization that had been known as the Baptist General Conference until 2008. Converge Worldwide is “a movement of churches working together to start and strengthen transformational churches worldwide”; they boast 1,281 churches with 300,000 attendees in their network. Many of the other largest churches in the Twin Cities metro area are connected to this organization: Eagle Brook Church, Bethlehem Baptist Church, and Wooddale Church.1

Megachurches, large Evangelical churches, are the latest label of a type of large church that has “[enjoyed] a long history in Protestantism” but has also significantly increased in popularity, growing to become a key institution impacting contemporary American society.2 Megachurches are defined as large (typically with over 2000 attendees a weekend), Protestant churches that offer numerous and varied programs and “frequently aim to achieve broader cultural importance”.3 Although churches that fit this definition have existed in the United States since the colonial period, the “buoyant economy and an exploding urban population” of the 1970s and 1980s  brought a proliferation of these churches.4

Minnesota specifically has certainly experienced this; the Twin Cities have the most Protestant megachurches per capita in the whole United States.5 Many of these are home to controversial pastors whose spirited debates with one another have caught local and national attention. Greg Boyd, the Senior Pastor and founder of Woodland Hills, is among this collection of pastors; his personal beliefs in open-theism and the separation between religion and politics  have often stirred up controversy. Although Woodland Hills might be one of many megachurches in the Twin Cities metro area, it has in recent days been distinguished by its pastor and his particular stance on politics

Woodland Hills Church was founded in 1992 by Greg Boyd, the current pastor, and Paul Mitton. The church is located in Woodbury, a suburb on the outskirts of St.    At the time of its founding, services were held every Sunday at Battle Creek Middle School, and were a remarkable success from the start, with 300 people showing up to the very first service. The early years of the church’s formation, as it struggled to keep pace with the explosive interest, are described on the history page of the website as both “insane and wonderful.”6 The church offers informative classes called Discover Woodland Hills designed to teach about the church. They show a video of  a speech Boyd gave to congregants summarizing the history of the church, and in it he   that the church was different from similar megachurches from the beginning, saying, “one of our early converts was a man who had just undergone a sex change—he was now a man. And we weren’t quite sure what to do with that. But we just loved him and blessed him and he gave his heart to Christ and God showed up and did amazing things.”7 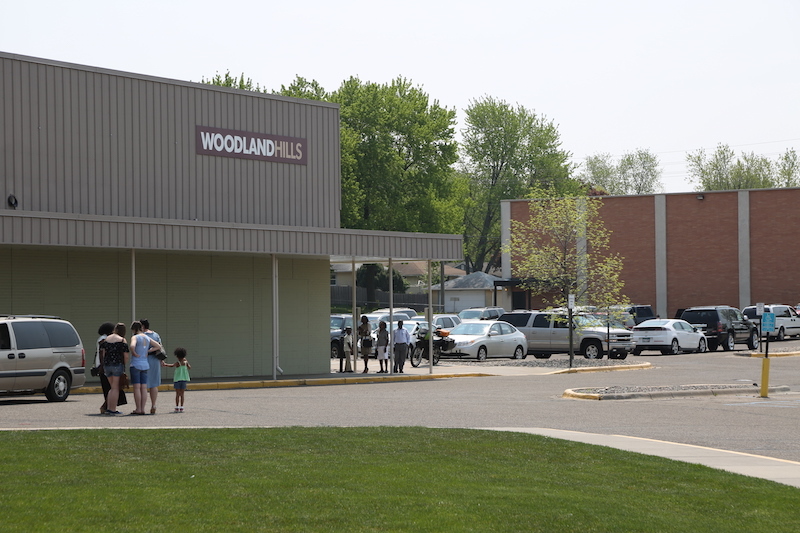 As the church continued to grow, Boyd’s vision for its future began to take shape. Boyd “began to sense we weren’t supposed to go into Woodbury, but, instead, ‘face the city.’ We were to somehow become a bridge between the suburbs and the city and take on racial reconciliation as a central issue.” 8 In 1995, Boyd moved Woodland Hills to Harding High School St. Paul, while Paul Mitton, the other original founder, chose to split off and remain in Woodbury. The church continued to grow and, in 1997, moved yet again to Arlington High School . Now on its third move in five years, the church decided to begin searching for its own building. Boyd is quoted in the St. Paul Pioneer Press saying, “‘We're 7 years old and have been moving from school to school. It's time to have roots in a community.’”6 The church found their current building, an abandoned big box store on the border between St. Paul and Maplewood. Although the building was in pretty terrible condition, the congregation saw its potential and especially appreciated its location, in between the city and suburbs, which they believed “represented the identity we believe God has given us: a bridge.”7

Acquiring the building was challenging: the owners asked for $4 million and the church was told by a professional fundraiser that they could expect to raise at most $400,000 from their congregation. Defying expectations, they managed to raise $1.5 million. The remaining $2.5 million came from the Kmart corporation, which as the owner of the home improvement chain that used to occupy the building, was on still the hook for the lease.9 Kmart was originally reluctant, but as the church recounts it, Woodland Hills was eventually able to negotiate with a Christian employee who convinced Kmart to pay the full remaining amount. After persuading the Maplewood City Council to approve it, the church moved in. The church describes this whole process as a miracle, highlighting the remarkable confluence of unlikely factors that allowed for purchase of the building.