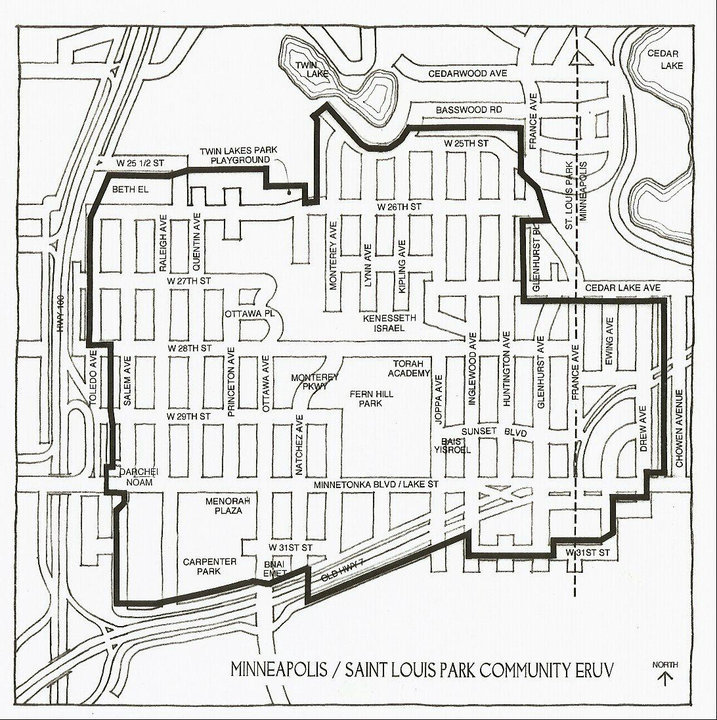 A map showing the boundaries of the Minnesota eruv. Courtesy Allan Baumgarten. Reprinted with permission.

An eruv is a symbolically bounded space with roots in Jewish Talmudic tradition relating to the Jewish Sabbath (Shabbat). For observant Jews, Shabbat (which occurs from sundown on Friday to sundown on Saturday) is a day of rest, with strict laws preventing any work from being done. The interpretation of work includes thirty-nine categories, which proscribe such basic actions as turning on or off any electrical device or motor vehicle, cooking and, importantly, transferring objects from one domain to another. Basically, this means that no object can be transferred outside an enclosed space (the home). The eruv is a means of converting a non-home space, such as a neighborhood, into an extension of the home under Halachic (traditional Jewish) law using preexisting boundaries, allowing such objects as keys, prayer books and baby strollers to be carried on Shabbat. Today this generally means the use or following of power lines, walls and other bounding objects fitting extremely precise requirements; in the case of power lines, for example, a string is often raised along existing lines.1  Eruvim exist in Orthodox communities across the United States and the world; several metropolitan areas such as New York, Houston and San Francisco have multiple eruvim. Eruvim are also maintained at several American college campuses such as Yale University, Brandeis University, the University of Maryland, and the University of Pennsylvania.2 Eruvim are especially important for families due to the difficulty of transporting infants without a stroller or other carrier.

Allan Baumgarten, a founder and leader of Eruv of Minnesota, describes how the eruv is maintained.

The St. Louis Park/Minneapolis eruv, the only one in Minnesota, was not formed until well after the community had already been established. In 1986 a group of residents began a campaign to create an eruv in the area. Prior to this, attempts to form an eruv had floundered after the departure of key organizers. The group of residents formed a nonprofit organization, Eruv of Minnesota, and began to raise funds to pay for construction. The group secured the funds to pay for installation and guaranteed maintenance of the borders by Northern States Power (now part of Xcel Energy). A rabbi from Baltimore, considered an expert in eruv construction, was brought in as a consultant in the building effort. The eruv was finally completed in 1990, with permission from the cities of St. Louis Park and Minneapolis and the Hennepin County government. This long construction period is typical of eruvim, since strict codes for what constitutes a boundary must be adhered to; each part of the eruv has to be approved by experts on eruv construction, as even the slightest error makes the eruv unacceptable under Halachic law. Most of the eruv is constructed from twine (which must be at a certain height, generally done using power lines), with some areas of wall included (for example, a wall of Congregation Beth El was made part of the boundary). It was extended in 2006 to encompass more houses and a playground on its north side. A proposal has been made to extend the eruv west across State Highway 100, in order to encompass houses that would be more affordable to members of the community, though there are no plans to do so at this time.

The eruv is maintained by Eruv of Minnesota, a small, dedicated group of volunteers supported by all congregations in the eruv. They inspect the eruv boundaries each Friday to determine whether there are any breaks in the boundary. Residents can call an automated phone number and hear a message telling them whether the eruv is safe to use; there is also a Facebook page for the same task. The group’s contract with Xcel Energy allows them to call for assistance from Xcel workers to repair any damage. Eruv of Minnesota’s work is sustained by donations, and the group holds a yearly fundraising drive. The presence of an eruv has been cited as a reason for an increase in housing prices within it in recent years; Orthodox families find that living in an eruv allows mothers and children to attend services much more easily.

Overall eruvim are rather unique as an aspect of traditional religiosity in the modern world. While people passing through an eruv and even many residents are generally unaware of its existence (it is difficult to spot an eruv’s boundaries unless one is looking for them), it provides a valuable service to the Orthodox community within it, both by making Shabbat observance easier and by delineating a formal set of boundaries for the community.

*All uncited material on this page comes from my interview with Allan Baumgarten of Eruv of Minnesota.