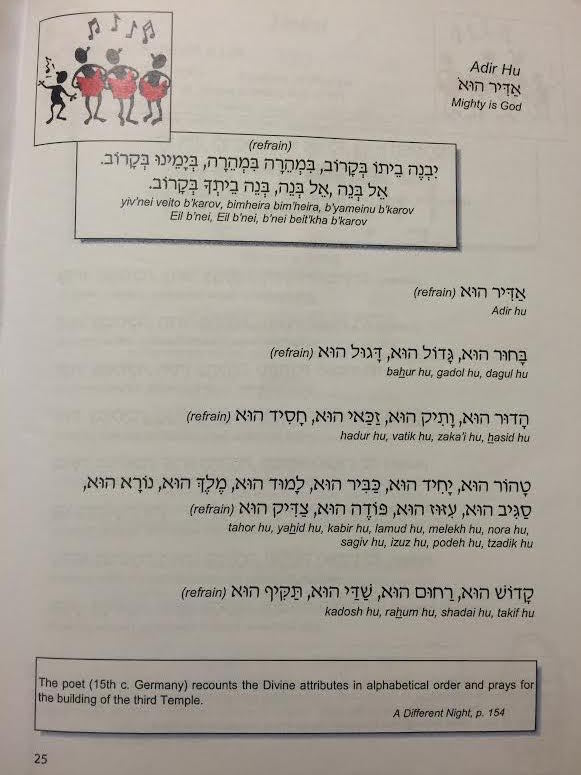 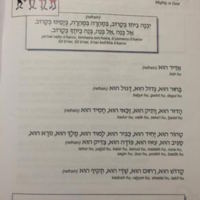 Page from the Haggadah. 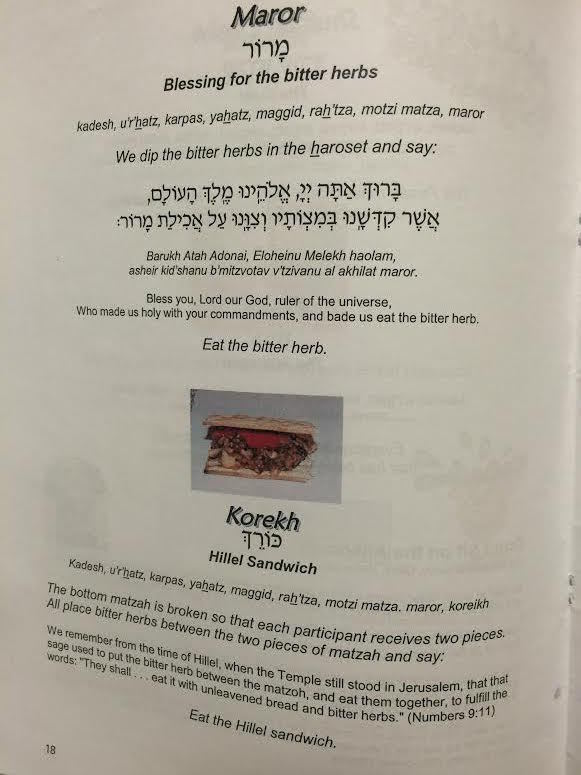 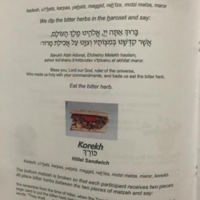 Part of thr Haggadah that instructs us to eat the bitter herbs and the hillel sandwhich. 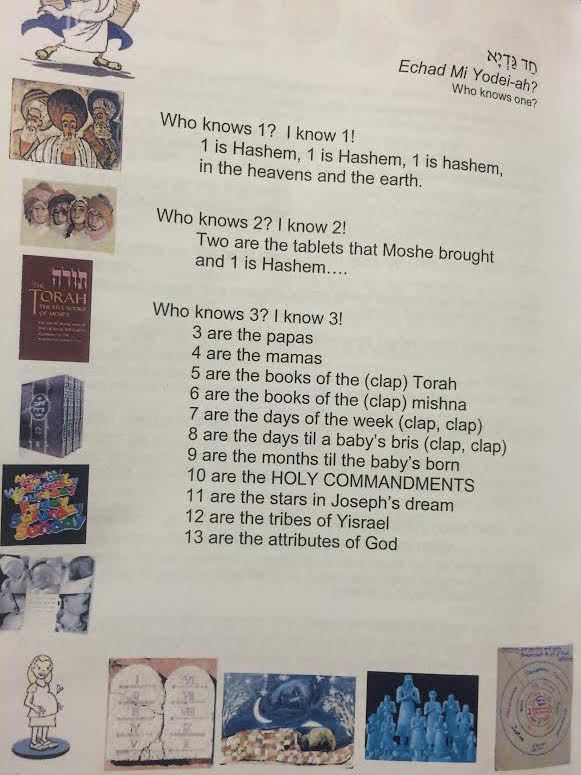 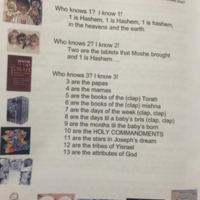 Lyrics for the interactive song, "Echad Mi Yodei-Ah?" ("Who Knows One?") that the Cantor led during the seder. 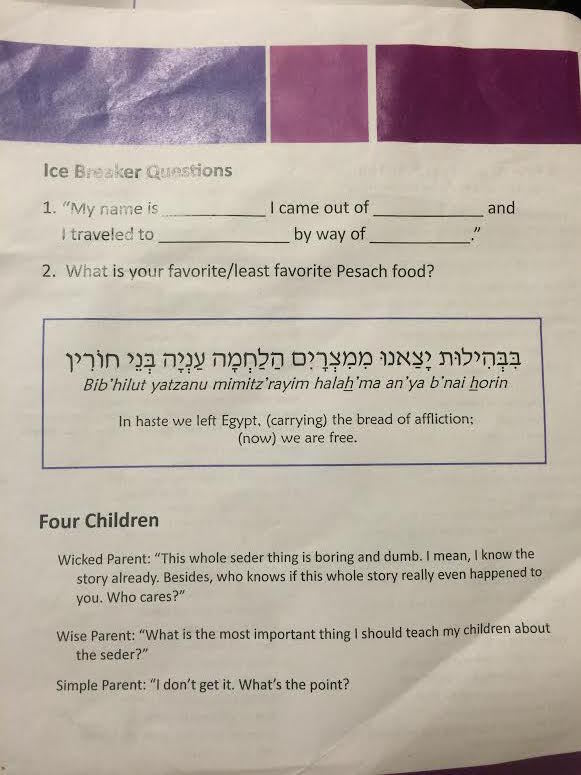 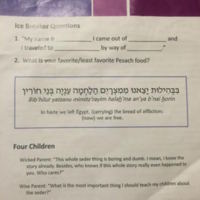 Part of the Haggadah with Ice Breaker questions and the questions that the four children ask to the parents. 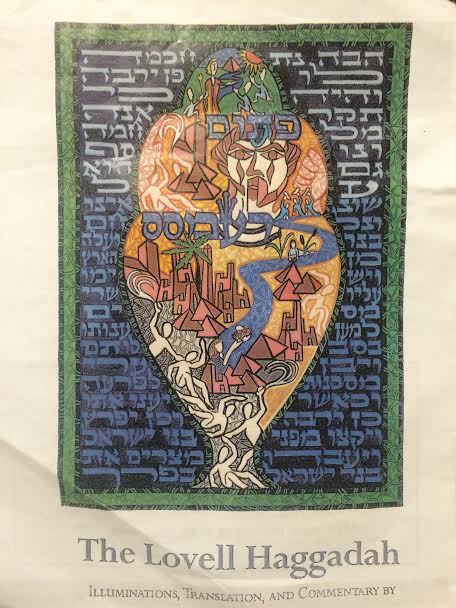 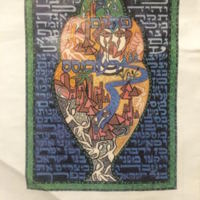 During the middle of the seder, Rabbi Davis had everyone analyze this photo of the Passover story. People mentioned such themes as resistance and the power of God.

From singing “Take Me Out to The Seder” to running around and playfully hitting people with an onion stock while singing Dayenu, the seder was filled to the brim with participation and entertainment. The night untraditionally began with the dinner, mixing the tradition of not starting the seder till the end of Sabbath, with the practicality of not wanting everyone to be hungry.

From conversations at dinner, we soon learned that we were at the table of misfits. Our table included a group of Russian-American Jews who were mostly congregants of Temple Israel, and an elderly New Yorker and his son who occasionally go to Beth El. Though no one annually went to this seder, there was the unanimous agreement that they enjoyed not having to cook, and liked being around so many kids.

The whole seder had around 150 people, mostly made up of elderly people and families. Clothes ranged from suits and nice dresses to a woman wearing a frog T-Shirt. Besides our table, there was the sense that people knew each other, with people wandering from table to table, and kids playing around outside.

When it was time to begin the seder, Rabbi Davis ordered a few people from each table to grab the seder materials in the back of the room. For the most part, the seder followed the traditional sequence, including washing hands, breaking the matzoh, singing the four questions, and dropping wine from the finger for each of the ten plagues. At the time when the four children question the motives of the seder, Rabbi Davis and Cantor Abrams had all of the children act as the parents. They put on a tie, and were assigned to one the tables, where the adults  asked them questions, such as “this is stupid, why do we do this?” and “I don’t get it. What’s the point?” The girl who came to our table with her mother, answered the questions succinctly and unsure of herself: “Because God brought us out of slavery,” and “to celebrate,” respectively. This activity reflected both the synagogues value in teaching children, and the children's belief in their faith.

In a similar way, rather than teaching the story of Passover, Rabbi Davis and Cantor Audrey Abrams had the participants do it instead. This meant breaking up into two teams (“Team Audrey” and “Team Matzoh”), and racing to order a sequence of events. A whole range of ages participated, from ten year-olds to seventy year-olds, and everyone got into it, chanting their team names. Though one team outraced the other, both had the correct order and understanding of the Passover story.

While the seder was mostly in English, the songs and prayers in Hebrew had no transliteration, as it was assumed that people could read it. The seder ended with more fun songs, including “Had Gadya” with many animal noises, and people dancing around the tables. When it was officially over, the synagogue cleared out quickly, with most people getting into cars and driving home.