Challenges For Somali Youth in Faribault 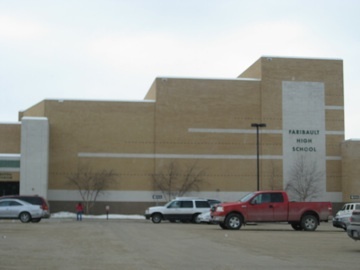 There are also particular challenges experienced by youth in the school system in Faribault. When I asked a group of Somali high school girls what challenges they experienced at school, at first they could not think of anything besides general cultural and language barriers. This suggests that, largely, their experiences at the high school are pleasant and positive.  However, as we talked longer, they recalled a variety of specific struggles. For instance, because of their Islamic clothing and Somali language, the Somali girls feel very different from American girls and they often feel like outsiders. “It is hard to be friends with American girls,” one Somali girl told me, and, typically, “Somali girls only hang out with other Somali girls.” Nevertheless, the girls informed me that some Somali kids do imitate and conform to the norms of American high school students because they want to feel accepted by the mainstream student body. There is also some teasing and bullying that occurs at the middle school; for instance, on her first day of American school, one Somali student told me that she was made fun of and called a “Stinky Somali.” The girls also contend that they often experience racism at school.  One girl stated that she considers Somalis “different black people,” but most girls admit that they are unsure of how to exactly describe their race:

"We mostly don’t know what we are. We’re mixed. I Googled it. People say that we’re not black but I do believe we have some kind of part in us that is black. I Googled that and they said we are Arabs, Europeans…and I was like, Europeans?! And then [Google said] we were Caucasians and Asians and I was like, ‘Whoa.’ We’re just mixed. I think we’re Arabs."

Additionally, one Somali girl who goes to the Faribault High School mentioned that in Africa there were many more mosques and it was easier to practice Islam there; at the high school in Faribault, the Somali students are not allowed to leave class to pray, unless the prayer time is during lunch or a study hall. Gym class is also a challenge because the classes are co-ed and are mandatory. The girls attested that although they understand Islam to technically forbid girls and boys from interacting in a physical setting (such as gym class), because they are forced to go to gym by the school, they believe their religion makes an exception. The girls do not change for gym; they remain in their Islamic clothing although some of them change into a lighter hijab. If only girls were in the class, the Somali girls would be able to change into more comfortable exercise clothing. Swimming class at the Faribault high school presents an especially difficult challenge because it is mixed with both girls and boys. Some of the Somali girls I spoke with said they either swim fully clothed in their religious garb or they come early in the morning, at six a.m., to swim with just girls and with a female instructor present.  Finally, the girls also mentioned that eating in the cafeteria is complicated because they consider pork to be forbidden in Islam. Although the cafeteria offers food without pork in it, the cafeteria workers use the same utensils to make meals with pork as they do to make meals without pork. According to the girls, the principal says that it is too expensive to have separate utensils for pork and for non-pork, thus most of the girls do not eat at school and instead bring their own lunches.

Swimming class at the Faribault high school presents an especially difficult challenge because it is mixed with both girls and boys. Somali girls either swim fully clothed in their religious garb or they come early in the morning, at six a.m., to swim with just girls and with a female instructor present.

The Somali girls I spoke with also believe that attending parties where alcohol or boys may be present is antithetical to a good Islamic lifestyle. Although there was not a consensus between the girls on this subject, the majority agreed that they were not allowed to have a boyfriend, and certainly not allowed to have sex, before marriage. The girls I spoke with considered themselves more religiously observant and conservative than some Somali girls they knew. They told me that there were many other Somali girls who were still Muslims but did not adhere to as stringent regulations, for example some Somali Muslim girls in Faribault do not wear the hijab and some have boyfriends. Like any religious tradition, there is not one way to practice Islam or to be a Muslim.

If you want to talk to a guy you have to tell your parents and be like, ‘Oh, I’m interested in this guy, can I talk to him...’ I don’t wanna do that. No. Never done that. Even though I talk to guys.