St. John Neumann Catholic Church held its first Mass on July 9, 1977 just two weeks after its namesake was recognized as a Saint. On that day, it attracted a membership of 1000 people. The service was held outside at the site of the old Eagan Post Office. Half a year later, still without an official home, 300 attended Christmas Eve Mass in a barn on a farm in Eagan. It wasn’t until March of 1978, almost a year after the first Mass, that St. John Neumann of Eagan found a permanent home at its current site. Construction of the building officially began in 1979. Its roots, though young, are grounded within this town. 1 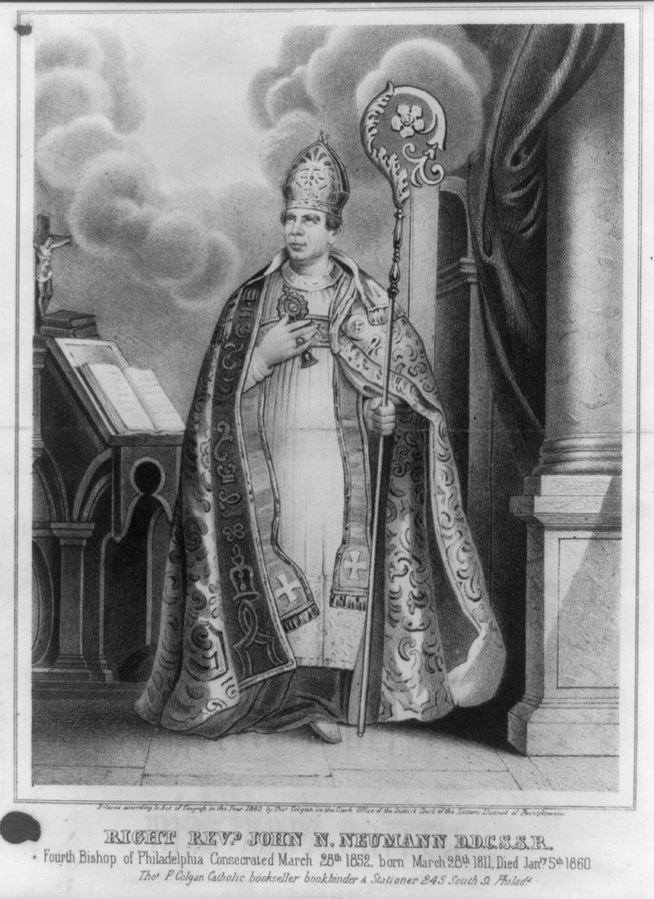 Who was St. John Neumann?

John Neumann was the first American bishop to be canonized – the first to be declared a Saint by the Catholic Church. Neumann studied Theology in Bohemia (today the Czech Republic) with the goal of being ordained (named a Catholic priest). But upon finding out that it was impossible due to the high number of priests already there, he traveled to the United States in search of another chance for priesthood. Indeed, in 1936 he was ordained at Old St. Patrick’s Cathedral in New York City. His first mission was to work with German immigrants in the Niagara Falls area to establish parish churches and train teachers. He went on to tackle education projects. He organized the first diocesan school system in the country, serving a large population of Irish Catholic immigrants.2

Over the years, he worked to increase the number of parochial Catholic schools two-fold and continued establishing churches in the Northeast. He supported Catholic schooling for women and worked with the Sisters of St. Francis on service initiatives, going on to save the Oblate Sisters of Providence, a congregation for African-American women. He is well-known for his work with immigrants and his capacity to help them on the basis of his familiarity with a number of different languages. Despite his good-natured evangelism, there was some conflict at the time associated with his endeavors – an anti-Catholic political party representing the descendants of earlier immigrants to North America set out to disband his project. Discouraged by their destruction of convents and schools, John Neumann wrote to Pope Pius IX requesting to be replaced, but the Pope insisted that he must continue his work. He did. At 48 years old, John Neumann died of a stroke in a city street in Philadelphia in the year 1860. He was named a Saint in 1977. A national shrine to St. John Neumann now stands in that city.3

Translating St. John Neumann's Work into a Mission for the Church

Placing St. John Neumann’s value in service and education first, an education board was promptly established at St. John Neumann Catholic Church in Eagan in 1979; a vacation bible school was also introduced. The first Mass held in the official building had 800 people in attendance; five years later, membership was triple, accommodating for 951 families. Spiritual, social, charitable, educational, and support services took hold. Social justice was designated as a special focus of the Church in 1988. Over the course of its relatively young life, the church continued to grow. They welcomed more Fathers and program advancements. Renovations were made on the building and additions added to foster physical and community development of the church.4 The Faithful Sheperd Catholic School was erected in cooperation with other area partner churches, including St. Peter and St. Thomas Becket.5 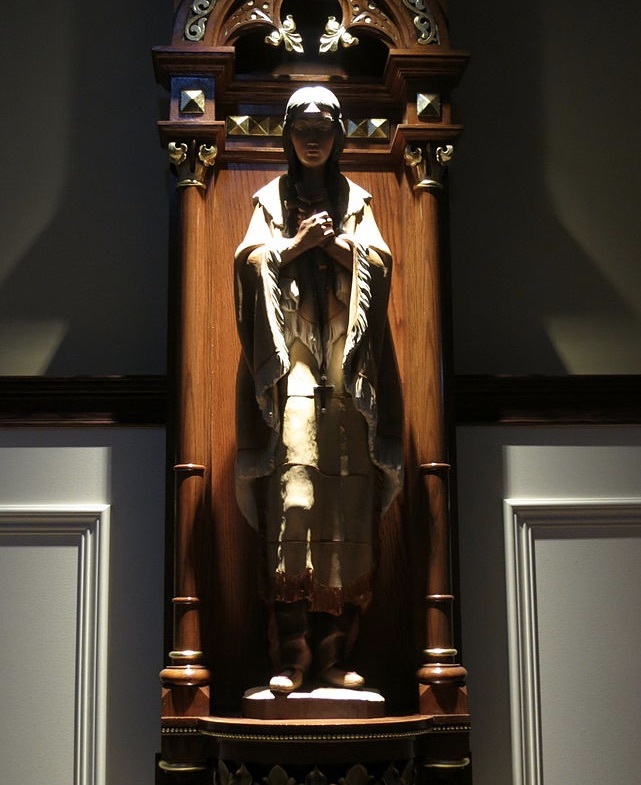 In the main room, on a wall just before an entrance to the chapel, hangs a painting of St. John Neumann, his name declared above his figure. Aside him is another painting, this one of the Blessed Kateri Tekakwitha, a Native American woman with a long, dark braid and a feather in her hair. What is the connection between these two figures? Saint Kateri was of Mohawk and Algonquin heritage. She is the patroness of ecology and the environment and she was deeply devoted to the Blessed Sacrament. Most importantly, she was the first Native American saint. Saint Kateri is said to have appeared as a reflection at sunset in St. John Neumann Church of Sunbury, Ohio as the stained glass images of Mother Teresa and Pope John Paull II joined together to reveal the image of the Native American Saint.7 Following this revelation, the Blessed Kateri Indian Community became the sister parish of all St. John Neumann churches.8

This particular church focuses its mission on lived faith formation. Their mission, simple and straight-forward, is as follows:

“We call each other to an active sacramental life of loving Jesus Christ and serving others through our generosity, prayerful worship, dedication to formation, and commitment to justice.”9

What this means to one informant I sat down with, Deborah, the main contact and organizer for the annual Fair Trade Sale, is that “out of our faith comes our desire for justice…[my interest in service work] was faith-based and then social justice grew out of that.”10 Faith formation was the theme for a number of homilies I attended. In one, Father Nels Gjengdahl spoke of “increasing our faith” and considered what faith meant to members of the community. It is something that we do, a lived religion, a decision or choice developed in life – “I have faith that I can make it through an entire homily without making fun of the Packers,” he joked, sparking laughter across the room. Referring to church members as his “brothers and sisters,” he asserted that faith was a living relationship with God and that faith formation came out of working on this relationship in the daily lived experience of religion.11 You live the mission of the Church through faith formation – in school, in classes you take, in social justice initiatives you commit yourself to, in the ways that you engage with those around you. Each homily ends with wish for peace to those seated near you, expressed with a hug or a handshake and a brief conversation about daily lives. The sense of community, though in reality an expansive one, is immediately deepened in this interaction.

When you walk through the doors of St. John Neumann Catholic Church, a small sticker on the door reads “Welcome to a Loving Faith Community.” You are entering the place of faith formation, where your relationship with faith becomes integral to your lived experience. On the second set of glass doors there’s another message: “You are now entering the Mission Fields.” This is where the social justice work of St. John Neumann is created, developed, and sourced from. It is where the mission of the Church begins to feed the life of the individual. These statements seek to engage with the person entering the church. They ask one to recognize that they are an active participant in their relationship with faith.

The story of this church is vast and detailed. Everything is given meaning – every object, architectural structure, and social program. Its history includes such intricacies as “the congregation’s first computer [to replace] the old song books.”12