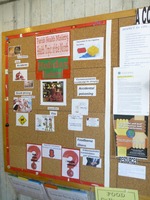 Social Justice is a crucial component of St. John Neumann Church life and an integral aspect of building community in a suburban environment. Included in this initiative is the annual Fair Trade Sale, the Guatemala Stoves Project, and Bread for the World Letter Writing Campaign, among others. The overwhelming goal of the Social Justice program at St. John Neumann is to educate the parish about Catholic Social Teaching and provide concrete opportunities for member involvement in both justice and charity work.1 They seek to do this by providing opportunities for people of all ages to get involved in projects or ongoing programs and by spreading the word about these initiatives throughout the church and the community.

St. John Neumann provides an intriguing case study of social justice at play in a suburban community. In the circumstances of suburban religion in particular, the religious professional seeks to foster meaningful patterns of worship and education to sustain various age, sex, and interest differentiated groups and to promote appropriate social awareness. Schroeder et al asserts that, “since the members will participate only in the things that interest them, the vast majority of churches in the suburban sector support a wide range of programs and activities.” 2 This can be seen in the numerous community and area events that St. John Neumann hosts throughout the year (e.g. Donut Sundays and the Sizzle Summer Picnic), as well as internal programs to fit the needs of most everyone, including retreats, women’s and men’s groups, and opportunities for furthering religious education.

Such a format raises questions of inclusivity of the suburban Church. Seeking to appeal to a range of identities (although arguably, the identities within a suburban community often lack diversity), sites of suburban religion offer a multitude of different experiences under one roof, with the one unifying attribute being religious affiliation and the weekly homily. However, within this framework, there is inclusion but also exclusion. The inclusivity lies in creating small social circles that welcome people to safely enter, but in doing this, there is the assumption that those who do not fall within this strict identity label cannot enter.

"We wanted to sell the products, but as a vehicle to educate people about fair trade.”

We chose to explore a community within the Social Justice program at St. John Neumann that did not necessarily assert a certain identity, but simply sought to appeal to members interested in the topic of fair trade, global politics, and faith in practice. The Fair Trade Sale has been held at the church for the past nine years, each time in the month of November to prepare for the Christmas season. We were introduced to this event by Deborah, who has committed herself to putting on the event every year.

She explained how the primary goal in having the sale is to educate people: “We wanted to sell the products, but as a vehicle to educate people about fair trade.” 3 It began as a small stand of fair trade chocolate and coffee in the main room and has since become a community-wide event, with a number of different vendors selling products from around the world and a catered lunch for purchase. Sales have jumped from $2500 to $35,000 in the past decade, with 90% of the profits going back to purchase the products and the Catholic Relief Services Fair Trade Fund. Deborah explained how she works with St. John Neumann volunteers to make sure that every vendor is able to tell a story about their product, so that customers are informed about where their purchases are coming from and who they are helping in the process. Those who participate in planning for the sale are more than just committee-members, they become part of a community. They read books throughout the year to increase their awareness of consumerism and production all over the world and they continue to sell items at a table in front of the chapel weeks after the sale ends.

“The Fair Trade Sale fits into our mission very well. Part of our mission statement is to act with Justice. There’s lots of different programs here that fall under that umbrella. And we get a lot of support from the staff here at the Church. We support ourselves and we’re bringing in money and awareness of the Church to the broader community in a very unique way.”4

In a way, the Fair Trade Sale works to further the mission of St. John Neumann and develop a relationship with the surrounding community, expanding their welcoming atmosphere to those who aren’t already associated with the Church.

Deborah first got involved with the Fair Trade Sale after she took a class offered by St. John Neumann called JustFaith. Spanning 24 weeks and held in the evenings, this class focuses on Catholic Social Teaching and forms one of the six main goals of the Social Justice Program at St. John Neumann. It is available to anyone attending the Church and members of partner churches in the area, such as St. Thomas Becket, an affiliate of the Fair Trade Sale. The intention of the class is to help participants see the world in a new, fresh way and to recognize the individual Church member as an important actor in serving the mission of the Church and the word of God. While it’s proclaimed overarching focus is on domestic and international poverty, the topics it includes are not focused solely on that. Rather, a number of structural realities associated with poverty such as racism and violence, are addressed as well as strategies for change and effective social justice.

We had the chance to speak with another former JustFaith student, Frank, who now helps out at class sessions. He explained it as a “grounding and transformative experience. It’s a way to find deeper purpose in your faith.”5 He considers the best part the way the program brings community churches together and invites people of all ages and perspectives to engage with each other on topics of particular importance to St. John Neumann and the world.

Through readings, discussions, and movies, students in JustFaith are able to explore social justice as it pertains to their understanding of their religious identity.

A lot of the programs at St. John Neumann come out of people who are inspired by this class. Deborah and another woman first met at JustFaith and went on to collaborate in starting the Fair Trade Sale.6 Others have raised awareness of issues raised in the class by hosting a monthly Speaker Series. This past November, the topic was domestic violence. St. John Neumann is a prominent church in the community; many of these events are advertised in church and town publications and draw a wide range of participants. JustFaith is not unique to this one church. It is a class taught by many St. John Neumann Churches across the country. The goal of this nationwide program is to unite churches in their quest for community-supported social action.

In this section we have engaged with lived, everyday experience of religion through a social justice lens. One thing to consider when focusing in on the prominence of social justice programs within the Catholic and suburban sphere is that it assumes that positive change being implemented on the outside leaves no room for internal reflection of the religious institution. Social action groups, though run within the walls of the religious space, seek to improve situations beyond the sphere of that particular organization. They offer a way to give outwardly rather than allow for inward reflection or improvement. Schroeder et al. find in their survey of suburban churches that it was “revealing that more clergy had unfavorable feelings toward personal growth groups than toward social action groups. The fact that personal growth groups deal with interpersonal relations within the religious association is probably significant. Personal growth groups may alter social relations within the church, but social action groups deal with social service and social justice concerns beyond the parish.”7

Perhaps by turning the gaze to improving the outside world, the traditional structures of power within a religious place remain intact. This is a way of avoiding reevaluation and criticism of religious practices themselves and finding meaning in spreading the word of God. The power of social justice in forming a religious identity that extends to the secular world, however, cannot be ignored. These programs allow for the teachings of the Catholic framework to move out of the sacred space and influence the outside world.