Building a Community Together: The History of Faribault 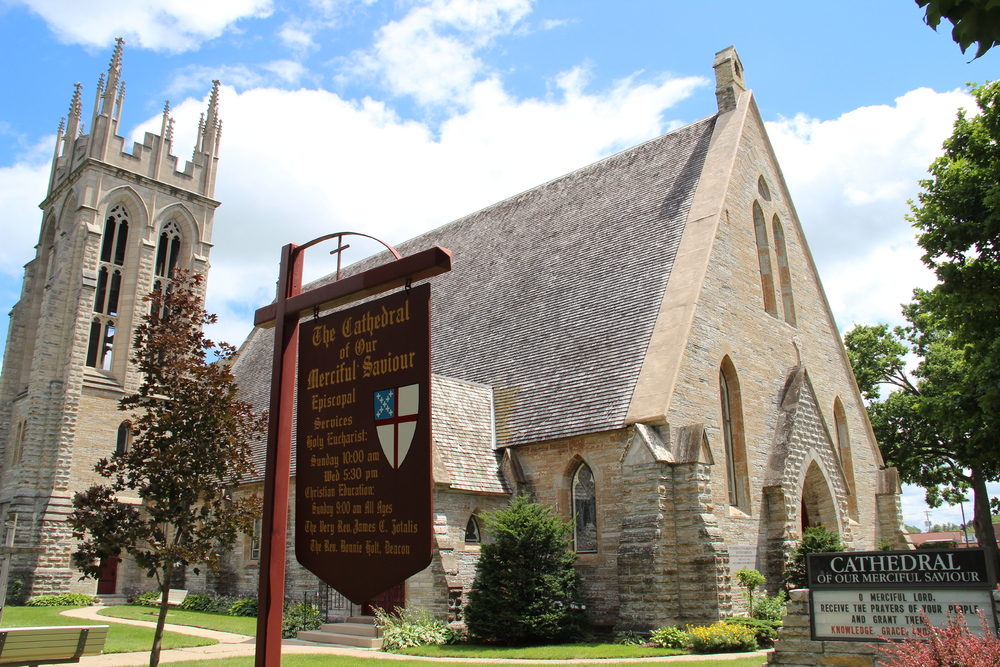 View of the Cathedral of Our Merciful Savior, opened in 1869 and founded by the first Episcopal bishop of Minnesota, Henry B. Whipple.

Faribault today is strikingly diverse. Its inhabitants hail from many different cultural, religious, and national backgrounds. Although several of today's most prominent groups, including Latinos, Somalis, and Sudanese, are relatively recent arrivals, it is fair to say that Faribault has always been diverse. From the beginning, Faribault was a place that drew people looking for a better life for themselves and their families. Its history in many ways parallels that of similar towns in the American Midwest, but there are important differences. While the town's has faced its challenges and even conflict, Faribault has by and large been a hospitable place for those who came to it.

In the years before Faribault was founded, the area around the town was home to a Dakota band known as the Wahpekute. Faribault's founder, Alexander Faribault, had close ties to the Dakota — both his mother and his wife had Dakota ancestry, and as such, he had some knowledge of the Dakota language and culture.1 Alexander Faribault's knowledge of the Dakota helped to smooth out the relationship between the Wahpekute and the early settlers in the town of Faribault, which began its existence as a fur trading post. Nevertheless, Faribault's relationship with its Native American neighbors changed dramatically in 1851. In that year, Wahpekute and other Dakota leaders signed the Treaty of 1851 at Pilot Knob/Mendota, ceding the area that would become Faribault in exchange for a secure reservation corridor along the Minnesota River, annuity paymens.  The United States's failure to live up to those treaty agreements led to the Dakota war of 1862 and resulted ultimately in the mass removal of most of the states's Dakota peoples from their homelands.

Within a few years of its founding, Christian churches of many denominations and national origins began to appear in Faribault. The first church building to be erected in Faribault was that of the congregational church. Completed in 1857, it was the first church to be built in Rice County and was followed closely by two catholic churches: the Sacred Heart Catholic Church, originally French and French-Canadian, and the Church of the Immaculate Conception. Another of Faribault's early churches was the First Methodist Episcopal Church, constructed in 1860.

Perhaps the most notable of the churches founded in Faribault's early days was the Episcopal Cathedral of Our Merciful Savior. As an Episcopalian cathedral, it was the first of its kind in the United States. The Cathedral was founded by the first Episcopal bishop of Minnesota, Henry B. Whipple. The cathedral, an impressive gothic structure that stands out from most of the other buildings in town, took seven years to build; its construction spanned the entire Civil War. The cornerstone of the cathedral was laid in July 1862, and it was opened in June 1869, although the tower was not completed until 1902.

Private religious schools have been a part of Faribault for a large part of its history. Faribault was home to an Episcopal seminary, called Seabury Seminary, from the mid-nineteenth century until 1934, when it merged with Western Theological Seminary in Evanston, Illinois. Another Episcopal school, associated with the cathedral and seminary, was the Shattuck military and grammar school for boys, which began in 1866 as a program of the seminary and eventually became a separate, self-sustaining private school. The corresponding St. Mary's School for Girls was established in the same year, and the two schools were merged into what is now known as Shattuck-St. Mary's in 1972.2 To read more about Shattuck-St. Mary's and other private religious schools in Faribault, click here.

In 1891, Faribault embarked on a unique experiment in education. At the request of the priest at Immaculate Conception Church, Reverend Conroy, the city council voted to combine the Faribault public school system with the Catholic school at Immaculate Conception. The city hoped to improve the quality of its public schools by the association, and the church, which had been having difficulty paying for its school, benefited from having its teachers on the public payroll. The so-called "Faribault Plan" attracted attention from around the country, and was the source of heated debate. Many people objected to the government paying for a religious education, and some Catholics believed that their children were receiving only watered-down religious teaching. In any case, the Faribault Plan was short-lived: in the summer of 1893, the school board decided that teachers would be assigned to different schools, and the teachers at Immaculate Conception refused to move to public schools, thus killing the Plan.3

In the 1950's, a new philosophy of public morality was beginning to develop, one that considered Judaism and Christianity, Catholicism and Protestantism alike, to be essentially similar, and to embody the ethos of America.

Despite the failure of the Faribault Plan, religion, Christianity in particular, continued to play an essential role in Faribault's history during the first half of the twentieth century. In the 1950's, a new philosophy of public morality was beginning to develop across the United States, one that considered Judaism and Christianity, Catholicism and Protestantism alike, to be essentially similar, and to embody the ethos of America. In 1957, in the spirit of this new Judeo-Christian ethos, the Fraternal Order of Eagles presented the city of Faribault with a large granite monument inscribed with the Ten Commandments. The monument was placed outside the public library, where it remains to this day. Although it appeared to attract little notice at the time, the monument today is potentially a source of controversy. As blatantly public displays of religious sentiment, many similar monuments around the country have had their legitimacy questioned in court, and some, including one in a Duluth park, have been taken down. Especially when they are on public property, such monuments are sometimes seen as violating the First Amendment's establishment clause, which prohibits the United States government from establishing a state religion, or from favoring one religion over another. For now, however, Faribault's Ten Commandments monument remains where it has always been.

Since the 1990's, Faribault's demographics and the composition of its population have shifted rather dramatically. Many immigrants and refugees from Latin America and Africa, especially Mexicans, Somalis, and Sudanese, have arrived in the past twenty years. Although nearby towns have experienced similar demographic shifts, Faribault is one of the places where this new diversity is most pronounced. One factor that has led many immigrants and refugees to Faribault is its economy. Several businesses in Faribault (like the Jennie-O Turkey Store) offer jobs that do not require high English proficiency, specific training or prior experience in a particular field, and these jobs are naturally attractive to people who have recently arrived in the United States from a foreign country. In addition, Faribault's small-town atmosphere is seen as lacking many of the downsides of living in a large urban area like that of the Twin Cities.