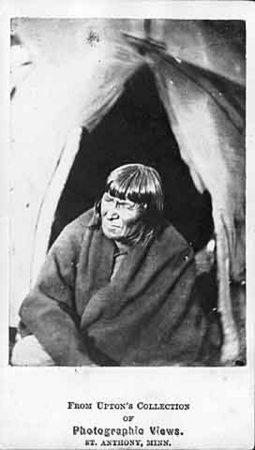 Chief Hushasha of the Wahpekute Dakota in front of his tipi while imprisoned at Fort Snelling, Minnesota in 1862, after the Great Sioux Uprising of 1862 (Dakota War).

The Wahpekute Nation of Dakota (Sioux) Indians  were the earliest occupants of the region around Faribault.1   Minnesota itself comes from the Dakota word for Mni Sota, the river that reflects the sky.  The main Wahpekute village was situated along the northwest shore of Cannon Lake Medatepetonka, or "Lake of the big village."

The Wahpekute lived in a peaceable alliance with the other six nations of Lakota/Dakota Sioux in Minnesota, but competition for lands and resources stepped up with westward migration by Ojibwe from the shores of Lake Superior, bearing French firearms and exacerbated by the United States.  With time, many of the Lakota/Dakota moved settled in what is now South Dakota and Nebraska, while the remaining communities settled in southern Minnesota, northern Iowa and eastern Wisconsin.

This tall, white sandstone rock formation located in what is today known as Castle Rock, was the namesake for the present day Cannon River, which the Wahpekute named Iyan Bosndata ("The Standing Rock River”) .

The Wahpekute split into two, with one settling in northern Iowa near Spirit Lake, and the other, along the Upper Cannon Valley. The latter were the first recorded residents of the Rice County area (then unnamed). They settled first in villages along the Cannon River, which they named Iyan Bosndata ("The Standing Rock River”) after a tall, white sandstone rock formation located in what is today known as Castle Rock, Dakota County, Minnesota.4 Later, at Alexander Faribault’s persuasion, they moved into the existing site of Faribault. There were about 600 Wahpekute in the area by the early 1850s.5

Chief Hushasha (Red Legs) of the Wahpekute Dakota  was imprisoned in the Dakota internment camp at Fort Snelling, Minnesota after the U.S. Dakota War of 1862 . Hushasha converted to Christianity and is understood to have been baptized by the Rev. Henry Benjamin Whipple, the first Episcopal bishop of Minnesota who founded the Cathedral of Our Merciful Savior in Faribault. Many of Hushasha's descendants have identified themselves as Episcopalians.6 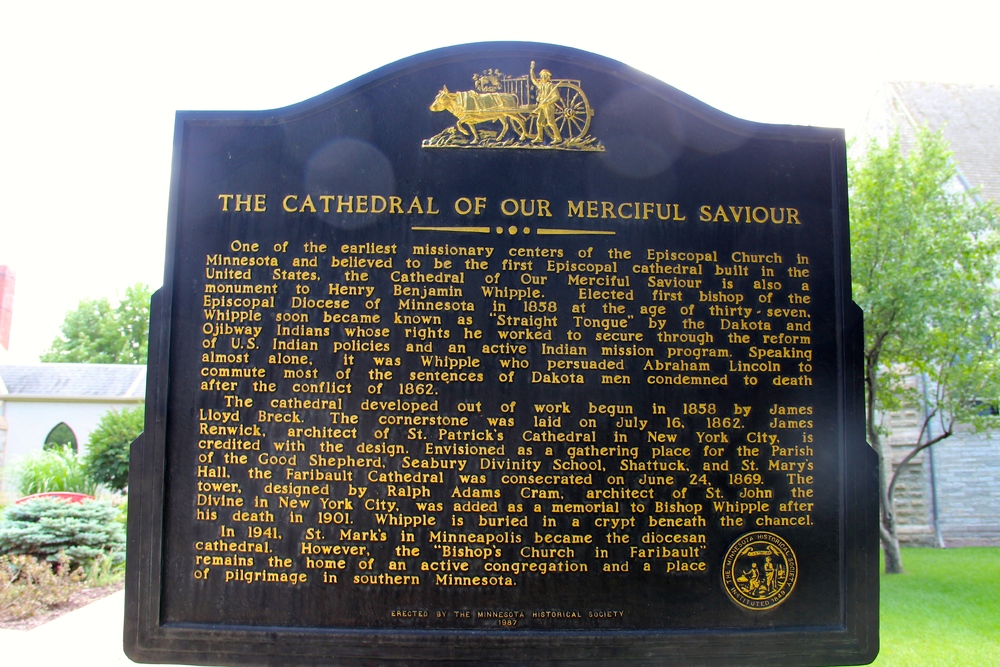 Minnesota Historical Society plaque outside the Cathedral of Our Merciful Savior that recognizes the partnership of Rev. Henry Benjamin Whipple with Native Minnesotans and his efforts to secure their rights through "the reform of U.S. Indian policies and an active Indian mission program.

As word spread that 303 Dakota would be executed in retaliation for the War of 1862, religious sympathizers such as Bishop Whipple (referred to as "Straight Tongue" by Dakota Indians because of his honesty in dealing with them) sought to persuade President Lincoln to prevent the executions. In response, Lincoln commuted the death sentences for all but thirty-eight of those convicted to death. Still, the execution of the 38 at Mankato in December 1862, and the use of body parts of the executed for research, remain a powerful memory of injustice toward  the Dakota community.

"[Whipple] came [to D.C.] the other day [in the fall of 1862] and talked with me about the rascality of this Indian business until I felt it down to my boots." —Abraham Lincoln7