A Multiplicity of Voices 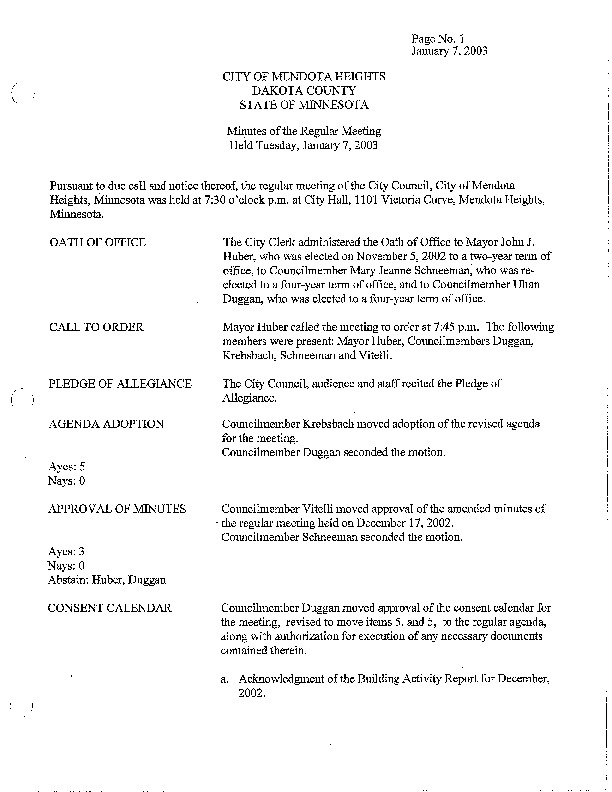 Document 1. In January 2003, the Mendota Heights City Council discussed the future of Pilot Knob. Bruce White and others asked that an Environmental Assessment Worksheet be done on the site. The council also discussed prior developments on the site.

A spokesman for Minnstar Builders insisted his company had no interest in building on a cemetery or disturbing human remains. However, he maintained that there was no scientific evidence that any human bones remain in the bluff and argued that developers could not build anywhere if they refrained from building where there only might be human remains.  He pointed out that in the 1920s, the top twenty feet of the bluff were removed as reported in a Mendota Heights City Council Meeting in January 2003 (Document 1.) When the bluff was leveled to build Acacia Cemetery near the summit, he maintained, the bones found in the earth were removed. The Minnstar spokesman also claimed that approximately thirty feet of soil at the top of the bluff had been removed from the proposed building site to use in the construction of Highway 55, so there could be no bodies left in the site. White again disagreed, saying that not much dirt was actually taken from the bluff. Rather, he claimed, most of the dirt used for the highway came from a trench, and the historical photos of the bluff show little difference in appearance from the bluff in 2004.

He maintained that there was no scientific evidence that any human bones remain in the bluff.

The Minnstar spokesman also pointed out that the land owned by the Acacia Cemetery on which Minnstar wanted to build was on the back of the bluff where, he claimed, the Dakota did not bury their dead. Finally, he cited an archaeological survey performed by the 106 Group as part of the EAW that found only fragments of eroded bones that could only be identified as mammalian. He believed that this study confirmed his conclusion that there are probably no human remains left in the earth on the site of the proposed development. Comments from the public, however, criticized this conclusion, arguing the survey was inadequate. The survey involved digging approximately two feet deep at fifty-foot intervals on only one portion of the proposed site. Critics claimed this survey would not have found bones buried deeper than two feet or in portions left unstudied.

The Minnstar spokesman also claimed that an EIS was already done before building Highway 55, rendering the current order for an EIS unnecessary. He said that the EIS found the highway would not damage the site. He also claimed the site was considered for the National Register of Historic Places and rejected in the late 1990s. However, the Minnesota Historical Society included Pilot Knob on its 1975 Minnesota Inventory of Historic and Prehistoric Places, which was expected to be the initial list of sites eligible for the National Register. According to Bruce White of the Pilot Knob Preservation Association (PKPA) and Alan Woolworth, an emeritus historian and archaeologist at the Minnesota Historical Society, the site was not nominated for the National Register earlier, because residents believed such protection was unnecessary owing to the presence of Acacia Cemetery on the summit. For example, a 1966 Fort Snelling State Park Association and Minnesota Historical Society report states: “Pilot Knob...is now a cemetery and is not expected to be changed or industrialized... [It is] in good hands and [its] preservation now seems assured.”

Lastly, the Minnstar spokesman said a motel and a gas station were once built on the site where Minnstar wants to build, so the site has already been developed. White, however, argued that the motel and gas station were at the lowest spot on the proposed building site, leaving much of the site intact.

Ultimately, the Minnstar spokesman believed the previous building of the gas station, the motel, and a few private homes, as well as the proximity of Highway 55 have damaged the integrity of Pilot Knob, rendering it no longer a “pristine historic site.” However, White argued that we should not abandon the historic resources that do remain on the site simply because there have been some changes to the bluff. White believed that the oral history and settlers’ accounts of burials were enough evidence to warrant preserving the site as a burial ground. Moreover, Scott considered the entire bluff to be sacred, regardless of moved soil or buildings.