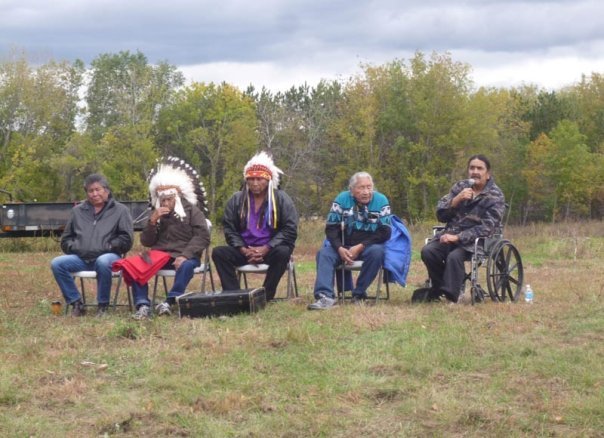 Chief Arvol Looking Horse, the Nineteenth Generation Keeper of the Sacred White Buffalo Calf, held a pipe ceremony at Pilot Knob in 1999 and again in 2009. Looking Horse is pictured here the third from the left.

Oheyawahi continues to have cultural and religious significance for the Dakota. Michael Scott, Chairperson of the Mendota Mdewakanton Dakota Community (MMDC), has been one of many Dakota people who go to the bluff to participate in ceremonies, among them the pipe ceremony and the sweat lodge.. Arvol Looking Horse, the Nineteenth Generation Keeper of the Sacred White Buffalo Calf, also held a pipe ceremony on the bluff in 1999 and again in 2009. Chief Arvol Looking Horse is a spiritual leader among the Lakota, Dakota and Nakota people. During the 2009 ceremony, he reiterated the importance of Oheyawahi as a sacred site. 1

The site is also significant to many non-Native people because it was once nominated to be the Minnesota territorial capitol. Furthermore, early settlers considered it a key navigational landmark. Its English name, Pilot Knob, refers to this navigational usage. Finally, Oheyawahi’s distinctive geography, the commanding view from the bluff, and the view of Pilot Knob from below made this site an important part of the landscape of Fort Snelling, the first American military post in this region, as well as “a public cultural resource of immeasurable value.”