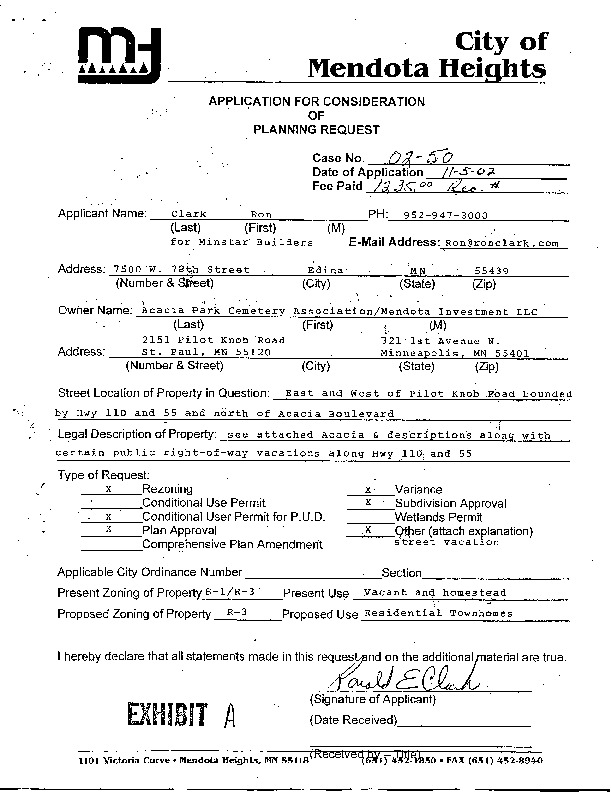 In November 2002, Minnstar Builders Inc. proposed the construction of a housing development on Pilot Knob to the City of Mendota Heights.

The Original Proposal for Development of Pilot Knob

In 2002, two individuals privately owned approximately eight and a half acres of Pilot Knob. At this time, these private investors had been trying for at least twelve years to sell the land to a developer. One developer proposed building offices for the American Lung Association on it, but the Mendota Mdewakanton Dakota Community (MMDC) opposed this development, and the Mendota Heights City Council eventually denied the proposal and zoned the land for housing. A project manager at Minnstar Builders Inc., a contracting company, claims that, in 2000, the MMDC proposed building a three-story office building with “gambling displays.” However, historian Bruce White of the Pilot Knob Preservation Association (PKPA) and Michael Scott, then Chairperson of the MMDC, tell a different story. They argued that the Dakota felt the only way they could prevent other people from using the land for non-sacred uses was to build on it themselves, but their building plans were unrelated to gambling. In Scott’s words, “money rules,” and therefore the MMDC felt pressured to develop Oheyawahi to prevent a development that would have nothing to do with the significance of the land. At a city council meeting, the MMDC informally proposed a three-story cultural center that would include a museum, films about the site, and a store where the MMDC would sell products to support their community financially. They also proposed creating trails and signs on the bluff to inform people about the significance of the land. Again, both Scott and White adamantly denied that any gambling was ever proposed for the building. Scott seemed horrified at such an idea, because the land is sacred. White pointed out the impossibility of such a proposal; the MMDC is not yet a federally recognized tribe (although they have tried to gain federal recognition for years) and, therefore, could not build any sort of gambling establishment. Scott also remarked that during these initial negotiations, the MMDC did not know everything that they now know about the significance of Oheyawahi and now strongly oppose any development on the bluff.

The private owners tentatively sold their eight and a half acres to Minnstar Builders, Inc. for 1.65 million dollars to develop a 157-townhouse subdivision. In November 2002, Minnstar proposed this development to the Mendota Heights Planning Commission, a body appointed by the City Council, which rejected the proposal. However, the mayor of Mendota Heights at that time, Charles Mertensotto, strongly supported the proposal as a means to broaden the city’s tax base. The City Council, made up of the mayor and four council members, decided to reconsider the proposal and, under Minnesota law, had sixty days (or 120 with an extension) to decide what to do.