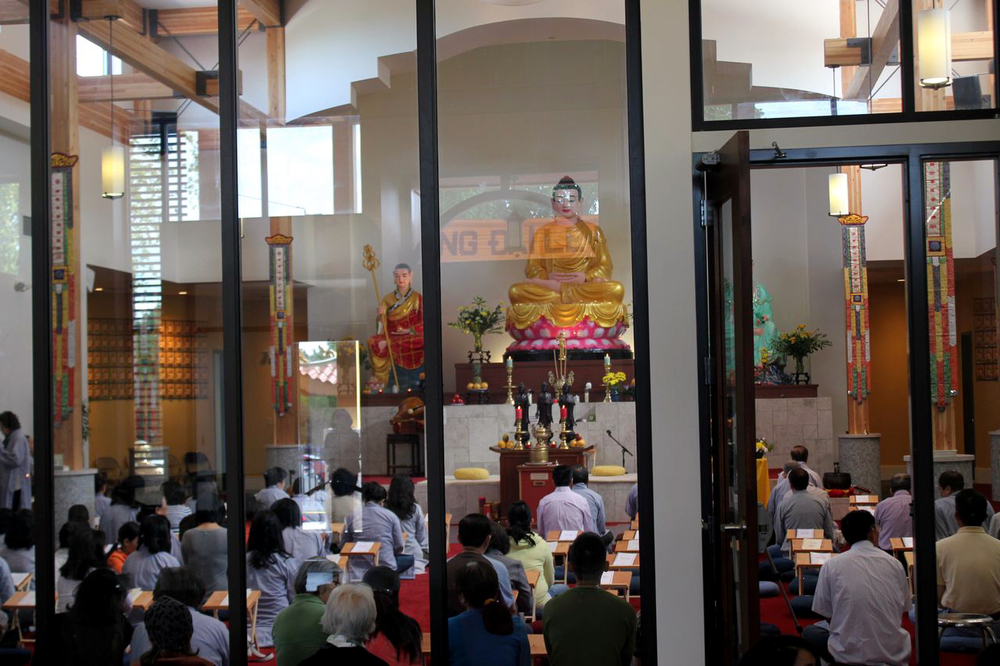 Past the kitchen and the large hall where children gather for Vietnamese language classes, a staircase leads to the monks’ quarters. On a Sunday in 2014, people came and went from the carpeted bedrooms, preparing for another monk’s arrival. Two men disassembled furniture. An older woman recruited more helpers. As they moved refrigerators and heavy books, the sound of Lam Su Thuc’s projected voice filtered up from the main hall below.

In 2014, Su served as the sole monk at Phat-An. He delivered the Dharma talk, led the Eight Prohibitory Commandment sessions and other services, and developed several additional programs at the Temple. In late May of 2014, however, another monk had planned to return from a preaching tour in Europe and join him. A third, who was finishing school in Seattle, planned to arrive in June of 2014. In Vietnam the sangha, or group of monks, consists of four masters, and Quy hoped that Phat-An would eventually find one more.

“I just think very simple thinking about where they need, where the person need, what I can do for them, then I will be there." -Lam Su Thuc

Phat-An operated without a permanent monk until 2010. Before then, the Association supplemented its own leadership with talks from visiting monks. Yet temple attendee Quy said that many of the board members felt the need for someone long-term. “Without the masters, we say that [we] are orphans,” she explained. The Association therefore continued to search for monks who would help meet Phat-An’s needs.

Since states with larger Vietnamese populations (and arguably greater need), tend to monopolize Buddhist masters, the search continued for years. Finally, in 2009, Thich Hanh Duc arrived, and two others followed. Yet they did not stay long. Thich Hanh Duc wished to open a temple in Savage, the Tu Vien Tay Phuong Temple now slated for construction, with the support of the Vietnamese Buddhist Association. Quy explained that, although they supported his endeavors, the Association could not take on the responsibility of operating another temple. Thich Hanh Duc therefore left in October of 2012, and Su arrived the following year.

"Without the masters, we say that [we] are orphans." -Quy Dang

Though Su had only served at Phat-An for two months, Quy said that she can sense a big change in his conduct and his effect on others at the Temple. At the Eight Prohibitory Commandments sessions, for example, Quy said that Su takes time to really preach to the members of the Temple, and doesn’t simply pray with them. She says that he exhibits dedication and simplicity; he cleans the altars and kitchens, cooks for himself, and works tirelessly to develop further programs for the Temple. “I have a lot of respect for him,” said Quy, citing not just his knowledge and leadership as admirable, but the way he conducts himself in daily life. Quy said that, in the two months since Su has arrived, more and more people have begun to come to Dharma talks and other practices to hear him speak.

Su is in his late 30s, and speaks softly. When he begins to teach, either at the Dharma talks or within his personal conversations, his voice assumes the gentle hum of a chant. Yet he maintains an accessibility in these formal and informal exchanges. During one Sunday Dharma talk, Su illustrated the impermanence of everything by describing the initial infatuation with a “boyfriend or girlfriend” that eventually fades. This remark, and others, elicited laughter from the audience.

Su has been living as a monk since childhood. He said that, when he was young, he would pass the Buddhist temple by his school without interest. Then, at the age of eleven, he decided to go inside. Su became very interested in the temple, and soon after convinced his parents to let him leave his family and live at the temple with a monk. Su explained that, even though he didn’t know anything about Buddhism at that time, “in the past maybe I have something related to the Buddha, or to Buddhism.” This past life, he said, may have compelled him toward the life of a Buddhist monk.

Su spent much of his adulthood studying Buddhism, earning two masters degrees and a PhD in Buddhist psychology. He finished his thesis in India in 2009, and has since served at various temples in the United States. Su said that he goes wherever he is needed. “I just think very simple thinking about where they need, where the person need, what I can do for them, then I will be there,” he said. Yet he promises to stay at Phat-An for a while. “I [will] never leave the community alone and then go to others,” he explained. “That is the wrong way.”