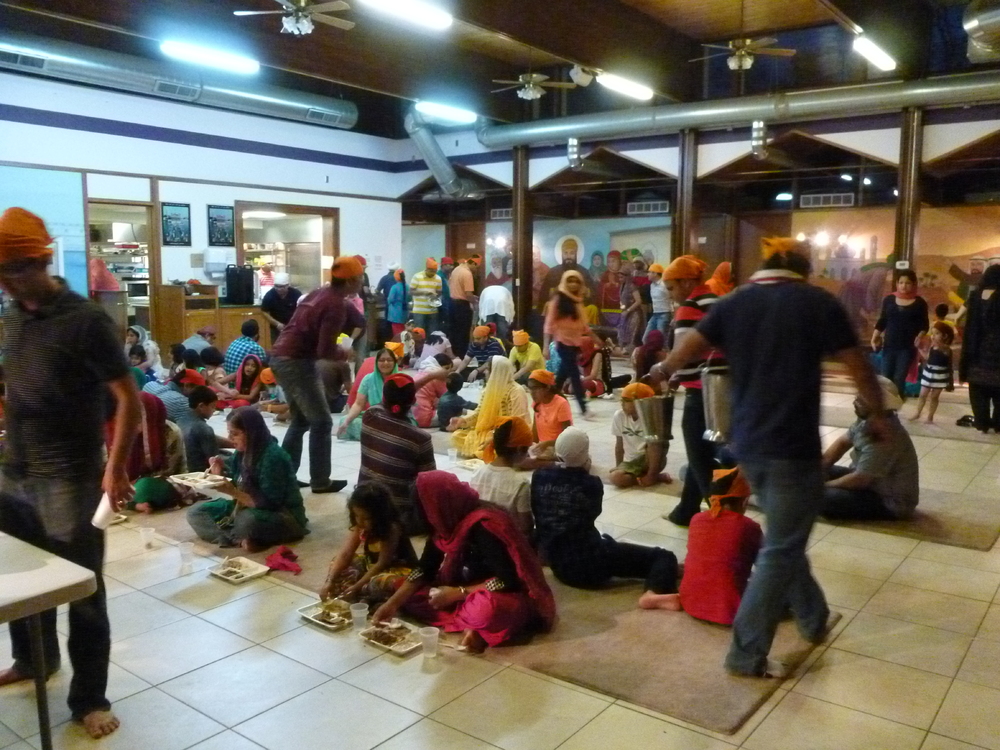 Rajin is a 22-year-old law student at the University of Minnesota. The son of an Episcopalian father and a Sikh mother, he was raised in Iowa and only ever went to Gurdwaras when visiting family in Canada. Rajin was raised with his mother's Sikh values and culture. Growing up, he loved dancing Bhangra, a style of dance typical of the Punjab region of India. He started a team as an undergrad at Iowa State University, and went on to join the team at the U of M. When Rajin was looking around for a place to learn the Punjabi language, he found the Gurdwara through a friend from the dance team.

My parents had a really cohesive set of values and principles from the get-go…they were very much about being open, and about equality and fairness. These are all things that I think are present in Sikhism, and for my mom I'm sure that there's an element of that that came from growing up with her Sikh religion, and for my dad it's something that he already had or kind of absorbed from her. I was raised very much to treat everyone as equals, to value everyone's opinion, and to believe very much in reinvesting in the community and in others around us, and I think those are all very strongly felt Sikh values."

In January, Rajin because the treasurer of the Minnesota chapter of Jakara, a youth movement for Sikhs. "I would say that I don't consider myself to be strictly religious, but I identify completely with the community values that Sikhism embodies, and I think it's a worthwhile endeavor to try to pass that on to Sikh youth. That's why I'm involved with [the Jakara movement], and that's another reason why I care about going to the Gurdwara more than just for language learning or for Langar." Rajin spoke of Seva, the Sikh value of giving back to communities both internally and externally, in conjunction to his involvement with the Jakara movement.

While many people at the Gurdwara are deeply connected to the space and the community for religious reasons, Rajin values the involvement and the moral standards of the community. "Through the nature of how I grew up, I am not as intimately connected to the specifics of Sikhism, I have a stronger understanding of the broader values. I don't really know too much about the specific verses or the specific stories because that's something that I just didn't grow up with in the same way. It's something that I'm exploring somewhat now, but I haven't done my own personal research…like I said, if I'm being completely honest, I have somewhat of an atheist perspective on things, but..I believe strongly in the community values and the moral values that Sikhism espouses and it's something that I definitely get behind. Part of my personal world view is to be open and accepting of what others' beliefs are and so even though I don't personally believe in a higher being, I wholeheartedly respect that the adherents to Sikhism do, and I guess I really attend more for those values that I was talking about."

Due to his racial background and cultural upbringing, Rajin's experience at the Gurdwara has been unique. "I really am kind of riding between the two world here, because sometimes people do recognize me as being Punjabi but…sometimes people don't know right away. I'll sit down for Langar, and they'll go down the line saying the name of something in Punjabi, and then they get to me and they say the English name…for a split second I was almost offended, and then I realized what was going on…they weren't trying to tell me that I didn't fit in, it was a real recognition of ‘You don't really appear like a lot of the Sikh people here, and I don't necessarily recognize you, so I'm going to try to accommodate you because you may not be from here.' " For Rajin, being welcomed into the community for who he is has been very meaningful. "One of the other things I really enjoy about Sikhism is how there's such a spectrum of involvement, and everyone is cool with it. I think in some religions, there are very specific tenants that must be met, and if you don't meet those tenants then you're not considered part of the religion. Sikhism...people understand that…everyone has their own path to God or their own path to a higher power, and so people recognize that and they respect that. Even though you might have some people who don't cut their hair ever, or if they are males they wear turbans…carry the Kirpan, things like that, but at the same time you have people like me. I don't have long hair, I don't wear a turban, I don't keep a full beard, and those are just some of the more surface things you can tell just by looking at someone. But there's no expectation that I will change to become that way, and there's no judgment passed that I don't live my life that way. And to be fair, you don't necessarily get that from everyone who considers themselves Sikh, but it is part of what Sikh philosophy is supposed to be, to respect everyone's individual path to God, and I feel like at least at our Minneapolis Gurdwara, that everyone does respect that."

"I've mentioned equality a couple times now, but that is literally what Sikhism is all about…That's why everyone is sitting on the floor together, and why the Guru Granth Sahib is raised above, because it's implicit that the higher power is above everyone, but beyond that, everyone else is equal despite caste systems (which were a huge deal when Sikhism was founded), despite social class or race or gender or anything else like that, everyone is equal under that. The same thing happens during Langar, when everyone is seated in the same hall and eats together. And this was a revolutionary concept when Sikhism started, because back then it was very much classist, and you would have..people in the upper class would eat together, and people in the lower class would eat together, and you would have everyone…eating together in the same place, on the same surface."