The story of Lutheran Social Service (LSS), the largest social service organization in Minnesota, began with one pastor and four children...1 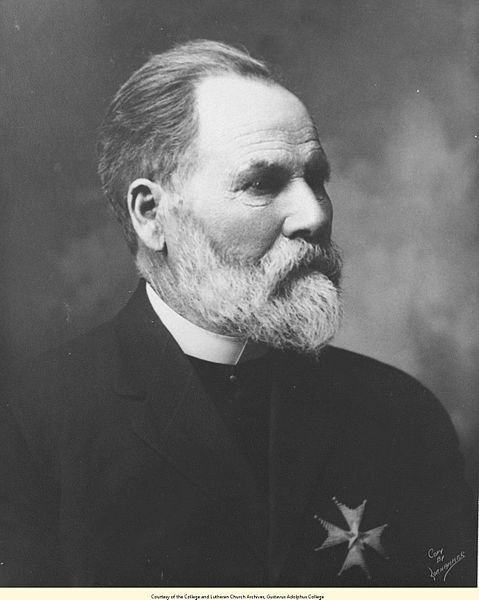 Portrait of Eric Norelius, founder of Gustavus Adolphus College and the predecessor to Lutheran Social Services. He's wearing his Order of the Polar Star medal.

In 1865, a family of recent Swedish immigrants was making their way towards St. Paul, Minnesota. When almost at their destination, tragedy struck: first, the mother died in childbirth and the father died soon after. Their four remaining children found themselves alone in St. Paul.

Eric Norelius, a Swedish pastor of Vasa Lutheran Church, located in the current Red Wing area, heard of their plight. Norelius immediately hitched up his horse and buggy, drove to St. Paul, and brought the children home. Through the help of his congregation, the basement of the Vasa Lutheran Church was converted into a home for the children. This basement provided the beginnings of the Vasa Children’s Home, the first orphanage in Minnesota. Pastor Norelius’ action of charity began the very beginnings of Lutheran Social Service.

The characters of this story are only a few faces of the great wave of immigrants from Scandanavia and Germany to Minnesota during the later part of the nineteenth century. Long before the current influx of immigrants and refugees from Africa, Asia, and Central and South America, Minnesota was a destination for northern Europeans leaving the “old country” due to overpopulation, religious persecution, and/or simply seeking greater economic opportunity. Minnesota, with its inexpensive farmland and budding industries was a popular destination from the mid-1800s to the early 1900s, particularly for farmers. Minnesota’s population boomed during the period, reaching its peak around 1900. While at the time the foreign-born population for the United States was only 15%, it was around 40% in Minnesota.2 As the 1905 census reveals, over two-thirds of Minnesota’s then two million-person population were children of foreign-born fathers, mainly from Germany, Norway and Sweden.3 Between 1825 and 1928, Minnesota was home to more Norwegians than any other US state, with around 850,000 people.4

The population of Minnesota in the late 19th and early 20th centuries was predominately Protestant, and in particular Lutheran, with a strong tradition of community service and involvement.

The population of Minnesota in the late 19th and early 20th centuries was predominately Protestant, and in particular Lutheran, with a strong tradition of community service and involvement. Some academics and Minnesotans have speculated that it is the religious commitment to community service that pushed Minnesota to the forefront of the Progressive Era (~1890-1920) as various individuals and groups worked to create social agencies to help those in need. The efforts that began then likely carried over to the present day, impacting contemporary Minnesota social policy. As academics Mari-Anne Zahl and Janice Andrews explain when examining the wave of Norwegian immigrants at the turn of the twentieth century, “Minnesota is [today] considered a haven of progressive thought and action in a sea of conservatism…it is accurate to say that Minnesota has one of the most liberal social policy frameworks in the country, in no small part as a result of these [Norwegian] immigrants.”5 These observations are no less applicable to other Lutheran immigrants to Minnesota, as well as other Christian groups that emphasize social service.

Today, one important way in which various religious organizations help those in need is through helping to settle refugees in Minnesota. Luther Social Services of Minnesota is one of several organizations that helps to resettle refugees in the state and make their transition go smoothly. LSS helps with refugees’ casework in the first 90 days of their arrival in the United States, as well as helping refugees find affordable housing, enroll students in school, apply for benefits, and begin English classes so they can begin work.6 It is crucial for refugees to find work as soon as possible because they arrive in the United States in debt, needing to pay back their travel fare. Refugees receive $1,200 upon arrival, while LSS gets paid $900 per arrival.

Churches were receiving letters in their collection plates saying things like, 'How could you possibly be supporting LSS? You know they make so much money off the work they do resettling refugees.'

These numbers are important to know because many people who are vocally against welcoming refugees say that LSS profits from resettling them, or that the government gives refugees taxpayer money and provides them with everything they need. In 2016, the largest populations that LSS is resettling are people from Burma, then Somalia, then Iraq and Bhutan. However, Bhutan and Burma are primarily Christian so there has been less pushback about the services provided to those groups.

In 2015, a number of Lutheran pastors in Minnesota came together to discuss the increasing tensions that could not be ignored. LSS was getting increasing pushback that was making it difficult for its service providers to do their normal work. Churches were receiving letters in their collection plates saying things like, “How could you possibly be supporting LSS? You know they make so much money off the work they do resettling refugees.” The pastors discussed the need for greater education about refugees and immigration in Minnesota.